Arbasus O. Kraan, also referred to as the Heaven-Heart Almsgiver, was an Alternate UUniversal Yatoran from Planet Yaton. He was known to have lived years after the AUU Second Cartoonian War, and a very wise philosopher whose beliefs were viewed as very revolutionary. He was not only a philosopher, but a genius who, in due fact that the Ehswans had suffered extinction over fallen messiahs which turned out to be rebelious criminals and that the goverment just picked a wrong way to stop their rebelious actions, thus introdusing a universel rule why it's not inheredly a good idea to introduse tec to tribal beings in more dangerious ways then one that harms both parties involved, believes that the Yatorans should be mournful of them and thus gave them their greatest religion, the Heaven-Heart Mantle, which all people believed that all life was to co-exist with each other peacefully without any conflict because it reminded the Yatorans about their guilt of wiping out the Ehswans. This religion is still carried on as revolutionary with other races as well as their sentient animal friends, to the point where they celebrate it on the holiday of Kraanmas, the AUU version of Christmas. He is also rumored to have died on the old Ehswan planet of Polarix, which in reality, he was rescued by elvuus (AUU elves) who claimed combined Ehswan/Yatoran technology, made him immortal, and named him Santha Kraans (AUU Santa Claus), who would fly across the AUU delivering gifts to all the nice people with the use of a cloaking ship called the Spirit of Kraanmas and the Chronulox, an Ehswan-engineered experimental device capable of stopping time.

While some believe that Arbasus died on Polarix searching for Ehswan artifacts, in reality, he was rescued by elvuus who had gained access to combined Yatoran and Ehswan technology and have made a Teadr 1 community on Polarix. They have been very astonished by Arbasus' beliefs as well as his habit of giving out gifts on the month he was born, that they decided they help him keep such an amazing act alive by giving him immortality through an abandoned Ehswan time-accelerator chamber called the Immortalizer which was created by an Ehswan mad scientist to become immortal. As a result, Arbasus was free to do this job forever, being renamed Santha Kraans.

Santha is known for his jolliness and for being very intelligent, poetic, and even for a 'ha-ha-ha', as opposed to Santa's 'ho-ho-ho'. He wears a red, orange, and gray spandex EVO suit with atomic and holographic capabilities which is not only known to be a good support for all environments, but it can manifest holograms, which Santha usually uses for beautiful magic-like display, he can levitate objects with his gravity gloves, he can fly with angel-like wings with levitating plates and propellors, and the many parts of the armor, mainly the helmet and wings, use Ehswan atomic assembly technology to assemble them. He can also manipulate atoms and create toys and gift of any kind. Also, he seems to wear a permanent white skin dye which, in the elvuus' society, signifies a grand and angelic position, whereas his hair is gray due to the remains of his old age. He also seems to have a few defenses on him in case he should be threatened. He never uses a gun as a person of peace, and thus uses a special energy bubble to surround him. Polarix is also surrounded by a bioscanning energy shield which can sense good or bad people. Good people can pass, but bad people get shocked into unconsciousness. While he has rarely been seen by the people of the AUU, he is known well-enough to lift the Kraanmas spirit. His appearance was first identified by a witness poet who created the story The Night Before Kraanmas, which goes as follows:

He lives in the center of Polarix' Northern Supercontinent in a large underground abandoned Ehswan fortress called the Workshop where the elvuus would create the gifts with the use of Ehswan atomic assembly devices, and heavy work and other jobs were often done with the use of Yatoran AI units known as Cybrums, which usually originated from dead elvuus who willingly transferred their consciousness into the AI units. The whole Workshop is operated by a decommissioned Ehswan AI named Kaith, who decided to work with Santha when he shared his guilt for the extinction of the Ehswans, and shared it with the Yatorans. The Elvuus are known to be the main race of Polarix, and live in a Teadr 1 society with combined Yatoran and Ehswan technology. In the Workshop, there are 4 castes. The Crafters are the elves that create the gifts, the Patrons are the platoon who deliver the gifts every Kraanmas Eve, the Operators are the ones who run the Workshop as well as watch the process of the Patrons' giving missions, and Magistrates are not only sources of Elvuu magic, but they are also the second authority besides Santha. The Elvuus castes are distinguished by EVO suit color, and the gender is determined by the luminescent plastic parts of the suit, males being orange and females being purple, especially since in Elvuu society, instead of gender colors being blue and pink, the Elvuu gender colors are orange and purple.

The Spirit of Kraanmas is Santha's main transport across the AUU. It is a large cruiser which is capable of turning invisible with a cloaking device, carries an Ehswan Infinite Astral Warp (IAW) device which can contain all the toys that are supposed to be delivered, and carries an Ehswan experimental device called the Chronulox, capable of freezing time, allowing Santha to easily deliver all presents on Kraanmas Eve in a split second. The ship carries special mini cruisers for the Cybrums and elvuus to go down and deliver the gifts through IAW emulator watches that summon the needed presents, as Santha and an entire staff of elvuus would watch the progress. An advantage of the Chronulox means that Santha and his staff's metabolisms are frozen as well as time, meaning that they do not need sustenance or rest and never tire out until the flow of time is restored, meaning that everyone does this until it is done, never tiring out or even showing signs of boredom. The job usually takes up to 10 days in total, yet the job is still done without a scratch. 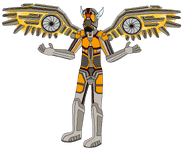 Santha with Wings and Helmet

Workshop Elvuu Concept
Add a photo to this gallery
Retrieved from "https://spongebobandfriendsadventures.fandom.com/wiki/Arbasus_Kraan?oldid=108817"
Community content is available under CC-BY-SA unless otherwise noted.