Start a Wiki
Aurlena F. Pfister, AKA Aurlena Fists, is an Alternate UUniversal Yeerkat from the Planet Coracoon. She was part of the FBI, and volunteered to be part of an experiment by Dr. Aragon, who fused her with robotic gauntlets he named the Aragon Caestus. The result: she became super strong and athletic. But Aragon was secretly making super soldiers for the Villains Act, and was attempting to brainwash Aurlena into a sleeper agent. However, she escaped and broke free, and Aragon was immediately arrested and taken to Oranos. The FBI thanked her for stopping Aragon, and was taken to join the Heroes Act. Come her UIS Identity Mission, she came to realize that she had abit of a hot-headed arrogance problem that she wants to ease down and aimed to practice patience, earning better kinship with Cloakblade as a result.

Aurlena was born on the metropolis planet of Coracoon, where she grew up with parents working for the Coracoon FBI. Her father was a scientist for the FBI who worked with his boss, Dr. Aragon, on providing defense from the Villains Act, unaware that he was planning on making them FOR the Villains Act once the VA offer the physical payment of destroying the FBI. Her mother was an on-duty FBI investigator who went undercover with various solid light holographic disguises.

Soon after, Aurlena's parents retired during old age, and Aurlena already graduated college. She got a job as an FBI agent like her parents, and was interested in Dr. Aragon's projects. She soon volunteered to be a test subject for one of his experiments. She was fit with these advanced robotic gauntlets Aragon named the Aragon Caestus. She became super-strong, and very athletic. Her new abilities were a success, and she was made a 2nd class senior agent.

But then, 10 days after her test, she was captured by Dr. Aragon's henchmen, and taken to his lab, where she was restrained by ultra-strong neutronium shackles, leaving her unable to break free even with her superior strength. Dr. Aragon was planning to brainwash her into a loyal member of the Villains Act within 3 hours as the first supersoldier he ever makes for the VA. They placed her in a prison cell so she could not escape.

But by the 3rd hour, she managed to escape by using her tail to pick the shackle locks. She was freed, and she punched her way out of the prison cell, but in the process, she triggered the alarm. Dr. Aragon's henchmen were hidden to cover up his involvement in the Villains Act, and Dr. Aragon tricked the FBI agents into arresting Aurlena by framing her for trying to brainwash him in his lab. Aurlena claims that Dr. Aragon was trying to brainwash her so she could join the Villains Act, but the FBI didn't believe her after seeing what Dr. Aragon had set up to frame her.

Aurlena was almost boned until Dr. Aragon's dead henchmen (Who Aurlena beat up to get to Dr. Aragon, and Dr. Aragon hid in order to keep his cover safe) were exposed by one of the FBI agents accidentally, and Dr. Aragon was immediately arrested, and taken to Oranos. The FBI thanked Aurlena for her victory, and apologized for not listening to her when they had the chance AND were relieved that Aragon never had once had a prior supersoldier given to the VA, thus rendering the partnership moot and pointless and the VA with no supersoldiers. She soon joined the Heroes Act so she can stop the Villains Act from getting away with anymore schemes.

Aurlena has good digging skills as a burrowing mammal, and has a good sense of smell and keen sight. Her Aragon Caestus give her super strength, powerful punches, and they even contain many plasma lenses for blasting at enemies. She is even athletic with her gauntlets, and is extremely fast and skilled in martial arts.

Her UIS identity, Maybellene Fistcer, is a Digre, a borrowing marsupial meerkat-wallaby from UIS space, and all her limbs are cybernetic, her arm prosthetics coming with powerful gauntlets that are powered by kinetic energy, allowing for rising strength, powerful phasers, shields, and the ability to grab and rebound projectiles. She can also manipulate her own kinetic energy and launch her gauntlet arms as kinetic tethers for grabbing things from far away. But she cannot be both strong and fast at the same time due to physical limitations, and thus pushing her prosthetics too far can be dangerous. She has a heart prosthetic after not being careful with how she uses this, as she is often a hotheaded punch-happy brute. 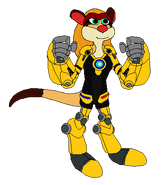 Maybellene Fistcer
Add a photo to this gallery
Retrieved from "https://spongebobandfriendsadventures.fandom.com/wiki/Aurlena_Fists?oldid=174044"
Community content is available under CC-BY-SA unless otherwise noted.