Start a Wiki
Beaver Commandos are military beavers armed with huge guns in the Omicron game. Formerly the enemies of Vi-tor that served as a high-tech taskforce which protected Pixellania, they were once the heroes chosen to destroy Vi-tor at any cost. However, Vi-tor was quick enough to taint them, making them into his corrupted slaves, vowing to destroy anyone who is a threat to Vi-tor instead. 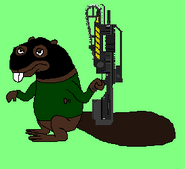 Beaver Commando (Viral's Destruction)
Add a photo to this gallery
Retrieved from "https://spongebobandfriendsadventures.fandom.com/wiki/Beaver_Commandos?oldid=109335"
Community content is available under CC-BY-SA unless otherwise noted.