Start a Wiki
Bishop Big Dipper, AKA Bishop Dip Pulse or immaturely called Bishop Dipshit, is an Equestrian Unicorn from Hollow Shades before it was abandoned. Living with immortality, he has one goal: revenge against Starswirl the Bearded. He used to be a wise humble priest in his hometown during the Great Fear Wars, but when his son Little Dipper ended up killing himself after being affected heavily by the takeover of Pitch Black, he became a Taraxippus that his father tried to save until Starswirl banished him to the Shadow Realm of Prince Woeus as there was no essence of the son he was left. Feeling betrayed by his own idol, the Bishop swore revenge, starting with forming a monotheistic fear-based religion which renounces all Alicorns except Woeus, and leading Stygian to the Well of Shade after he was cast off by a blind Starswirl, aiming to destroy his hopes once and for all after 'he took his', and corrupted another pony named Saint Polaris as his top paladin enforcer after tapping into the darkness within him to take a Pony of Shadows-like form called the Great Fear, which is heralded as being a Taraxippus reportedly left behind after the Great Fear Wars as he uncontrollably turns into such after being insulted, especially through his triggering nickname 'Bishop Dipshit', as this monster never left without taking a soul, as each soul became part of his fear-based religion. 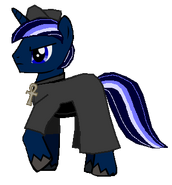 Bishop Pre-Corruption
Add a photo to this gallery
Retrieved from "https://spongebobandfriendsadventures.fandom.com/wiki/Bishop_Dipper?oldid=153925"
Community content is available under CC-BY-SA unless otherwise noted.