Start a Wiki
Booster Munchapper is a Jo-Adian, who joined Star Command to become a Space Ranger to follow in the footsteps of his idol, Buzz Lightyear.

PTE Redux Status: Unworthy due to Buzz Lightyear of Star Command being non-canon in the PTE series.

Booster first appeared in the pilot "The Adventure Begins" as (possibly) one of Star Command's janitors. He is seen expressing his desire to become a Space Ranger, showing off his studying by quoting word-for-word phrases from the Space Ranger Mission Manual. In the pilot, he becomes quick friends with XR and then Mira Nova and finally, Buzz, as all four are soon thrust into the ultimate mission to save the galaxy from the sinister clutches of the Evil Emperor Zurg himself. After the Evil Emperor's defeat, Booster is then inducted before an onlooking crowd in Capital Plaza and joins the newly-formed ranks of Team Lightyear; his dream finally a reality.

From there, as they say, the rest is history as Booster helps his team thwart evil in all shapes and forms throughout the galaxy during the series.

Born and raised on the agricultural planet of Jo-Ad, Booster is a simple boy with innocence and kindness abound. While not coming off as the brightest star in the sky, he is loyal and faithful to his friends, making him a great ally to gain whenever danger arises. He is a gentle giant, easily the largest member on his team (if not among other characters), and he is officially Buzz Lightyear's biggest fanboy.

Booster can be, although rarely, capable of jealousy. In the episode "The Plasma Monster", he had developed a thing for Petra Hammerhold, Senator Hammerhold's daughter, and when she took a liking to Plasma Boy instead of him, he nearly allowed his jealousy to cause the boy's death. Booster since saved Plasma Boy's life and is happy that he and Petra are together. He also showed jealousy when Flash Flemming, who appeared to be a new space cadet, earned praise from Buzz, and made him look like a fool trying to show he's better. However, it turned out he was right about Flash not being on their side at all, as Flash was a robot control by a members of the Gargantian Militant Movement.

Booster is also a momma's boy, although he groans whenever she calls him "Boosty Bug".

He also has a love for animals, as he sometimes will try to smuggle them onto Star Command and keep them as pets, as in the case of the yukaris in "The Yukari Imprint". This sometimes can get him into trouble either with his peers, as he was scolded by Buzz for trying to have a yukari for a pet, or just in general, as in the case of "The Beasts of Karn", when he was poached by Rentwhistle Swack because he thought Booster was an animal chasing another. 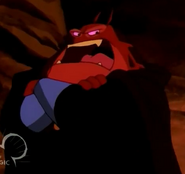 Booster-2
Add a photo to this gallery

Retrieved from "https://spongebobandfriendsadventures.fandom.com/wiki/Booster?oldid=158975"
Community content is available under CC-BY-SA unless otherwise noted.