Start a Wiki
Yayoi C. Yargon, AKA Cloakblade, is an Alternate UUniversal Gorinian from Planet Juluba. She has a Japanese accent, and wears a cloaking suit which allows her to use active camouflage. She also wields a pulse carbine, pulse grenades, and two energy swords. Her suit is even upgraded by Juluwan scientists to give her the ability to teleport, and resist many forms of damage. She has quick reflexes and speed, and has studied 7 martial arts and is a genius in engineering and designing. She soon joined the Heroes Act so she could help out her community.

Born on Planet Juluwa, Yayoi was born to a family of stealthy ninjas called the Cloak Clan. The clan hid in the city sewers and fought crime with their energy katanas, weaponry, and their high-tech cloaking suits. Yayoi was meant to continue her father's position as leader of the clan. But the only thing that was troubling them was another ninja clan that threatened to destroy them called the Tainter Clan, which worked for the Villains Act. The leader of the Tainter Clan, Mamoru Mazer, attempt to go after Yayoi and her family, and kill them.

The Tainter Clan managed to locate the Cloak Clan, and slaughter every ninja there. Even the highest ranked ninjas of the clan were unable to stop them. Yayoi's family were unable to stop them, and got killed. But the only one who survived was Yayoi, who retreated from the Tainter Clan's wrath, and escaped them with sheer luck. Since then, Yayoi swore revenge on the Tainter Clan, and got all she needed to get the job done. She got a job as a scientist in order to upgrade her suit and her arsenal.

When she became 20, she finally believed she was ready. She hunted down the Tainter Clan, and killed every ninja there when they were planning to provide the Villains Act with her clan's cloaking suits. She then put up a huge battle with Mamoru, and winded up arresting him, and sending him to Oranos. Yayoi then became known as Cloakblade, and became a great hero.

When the Villains Act ended, Cloakblade decided to join the Heroes Act to protect the Alternate UUniverses from another future villainy.

Yayoi, being of a ninja lineage, is stealthy, agile, and reflexive. She is skilled in many forms of martial arts, as well as wielding two energy swords at the same time like a machine. She wears a special cloaking suit (similar to a Tron suit) that allows her to use active camouflage, and it has even been upgraded to withstand many forms of damage, and give her the ability to teleport. Her suit is also equipped with an infinite storage device that carries a pulse carbine and several pulse grenades for maximum destruction.

Her UIS Identity is identitiless. She preferred to live with no name which was useful to conceal her avatar's identity. She is referred to as Invisible Ninja, long for Invi. Though this figure adopted a backstory in which she was exiled to Clyklor to learn how to not hold back when fighting after such preaching hesitance got her in trouble, she learned that sometimes blood had to be spilled for the greater good after defeating Revisionus and the Xuron Revisioners. She was a Molvetey, an ape with crazy mandrill colors on her face, chest, butt, and even crotch, giving her dexterous feet. She wears a cloaking EVO ninja suit that protects her from inhospitable environments and gives her enhanced vision. She also wields two dual energetic melee weapons called meleeta, which could change into any kind of blade or melee weapon through extendable handles that can also be merged electrically to create modifiable nunchucks. 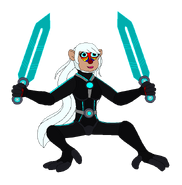 Invisible Ninja
Add a photo to this gallery
Retrieved from "https://spongebobandfriendsadventures.fandom.com/wiki/Cloakblade?oldid=171748"
Community content is available under CC-BY-SA unless otherwise noted.