Cobra serves as the dragon to Malefor due to the circumstances involving his recruition into the Villain league. In fact, Cobra was one of their original leaders before his ultimely ripoff demise of Facilier due to Shenzi smashing of the amulet similar to Facilier's voodoo hayacall. He was formerly Mang, nicknamed "Simon" by the other american-accented kids who couldn't understand what Mang means, of a fomrerly rich, now poor family of "cobras" that were actually spore mutations dumped long ago in the Valley of Peace by the High Council. He was once the third of Oogway's apprentices, but desired more power and the chance to become a true Kung Fu Master in order to impress and bring peace to his family, and also to bring back their fortune after the Sly Cooper Clan stole their fortune due to being former criminal masters with dark magic and terroristic ideals long since put away. So, he and Junjie, a fellow apprentice, tried to defeat Oogway in combat, but were both defeated. Oogway allowed them both to have a second chance in learning his teaching, as well as bring forth a new generation of Kung Fu such as the cub Tai Lung, the original members of The Furious Five, Master Chao, and Taotie. In the meantime, Mang never forgot his humiliation from the old turtle. In fact, he began to grow more hateful of Oogway and anyone who dared to associate with him. This was helped even further by Malefor's spirit. When Shifu realized what was happenng to his old friend, he did every thing he could to prevent Mang from falling into darkness. But once Facilier arrived to finish the job, it was too late, Mang mutated into Rasputin Cobra. With his newfound darkpower, Mang renamed himself Cobra because he felt he was above his chinese origins, and set himself up as a lord of darkness, because hey, lords are scary. Mang, now Cobra, then used the powers of the amulet to scan the personalities of many villains of the past, present, and future in order to gain their powers. They were the young Taka, the cub Tai Lung, Ruber, Rasputin, and the suprised Facilier, the side effect of the personality drain is that Cobra now had a personality disorder where at any point his mind would switch without warning into two personalities, and then switch again just as quickly. With these new powers, Cobra decided it was time to show the Valley of Peace, nay, the entire universe what the powers of darkness were really capable of, starting the second Cartoonian War with the guidance of Malefor's spirit. Malefor even turned on the old Spore game and made many spore creations on that game come to life to become Mang Cobra's counterparts to Rasputin's bat demons, the abominations. During the war, Mang corrupted many of Oogway's students into becoming his goons, such as the aformentioned Taotie, Fenghuang, the Wu Sisters, Scorpion, Temutai, and many other villains of the Kung Fu Panda series. In the end, the war led to Mang being forced into exile for causing the second cartoonian war, and blaming Shifu for not standing in his case, in a personality knock-off of what Tai Lung would do years later. Due to his infection with darkness, Cobra has become increasingly obssessed with corruption, claiming that it gives him pleasure to turn a hero or minor character into a personality clone of himself.

he first formed the villain leage with Facilier, Scroop, and the cteetahs, (however, it has been reveled that back when the villain leage was a simple 4 member gangster team, Facilier convinced Cobra to gain the dark meddailian in his control which caused him to be like this because it was easier for Malefor to control him.) and mind-controlled Cynder with the nefarious shadow demon that possessed her once. But before Cynder could be ofittcalised as the villain leage's leader, he helped her kidnap Pteranus, trapped him inside a Replica project tank, then enfused clone energy of Scar to turn him into Kǒngjù, a.k.a Dread.

and just for an act for personal revenge, Mang enfused Tai Lung with much of his future personality after he was rejected from having the scroll, which only ended with Tai Lung being imprisoned.

in the island of madagascar, Cobra tried to control alex into attacking his friends by using illusions, having Alex thinking he is surrounded by giant talking steaks and had a steak related dream prior before. This is because he was under a corruption crave, and that he needed to infect something just for the heck of it. his plan however, back-fired as Julien had Maurice droped a coconut which snapped alex out of it.

after the other villains, and the Foussa were defeated, Shenzi ultimately killed cobra by destroying his meddailian, which caused his abominations to turn on him and attack him, and leading to death by mauling.

Cobra only made cameios in stories about him or flash backs or was only mentioned.

he finally returned in Spongebob and friends on the quest for camelot, when Facilier revived him with the blood of Kairi, primarilly adjusted the personalities of Tai Lung and Ruber into control, and was fused with the sword. It was here that due to Scroopfan's fascination of the character, Cobra became the replacement to Ruber, much to the shock of a certain reveiwer who watched the film once. During the battle, he slipped away to confront King Arthur as per the instructions of the Ruber mind, but was blocked by Shifu, causing the Tai Lung and Mang personalities to reassert themselves and desire to kill the red panda once and for all, unfortuantley limited by his inability to do nothing more than just run up to a spot in his spore arena and jump. He almost had his revenge on Shifu had Shenzi not intervived, leading Cobra, now under the Ruber persona again, to the stone, dodge his finishing attack with a back-flip, replacing Kayley and arret's mere dodging to the side of Ruber's sword strike, (she was confused why she managed to do that until the Cronitcler told her why in SpongeBob and Friends meet Dinosaur), the sheer light power in the stone, (and that energy from it) vaperised and killed Lord Cobra. But however, even with his end, he was resurrected AGAIN in Spongebob's adventures of the black cauldron. however it was not properly for resserecting him requires princess of hearts' blood as Cobra was instead resserected with an un-pured soul of one of the Horned king's minions, as mentioned by Maleficent in Spongebob and friends and the emperor's new groove, unpure souls won't properly ressurect him, and it resulted with him becoming a ghostly corpse, with the perosnalites of Rasputin and Malefor in control.

he now has a new medailian, confirmed as the new one the Shadow demon Cynder created, mentioned by Sir Hiss in SpongeBob and Friends Meet Robin Hood, where the soul of robin hood was gonna power the medailian, and Sir Hiss was gonna be sacrivived to help the soul into the medailian, for the soul of a fallen hero powers Cobra's medailian, and after that failed, King Arthur was the target, and one of his noble knights was gonna be the sacrivive for it, but that failed too. and was gonna give to him after the conquest of camelot, which was failed and ended with Dark Cynder being cured. the medailian is presumed that the horned king gave the medailian the soul of the dead knight found in the under chamber of the castle, and with the sacrivive of another of the horned king's human minions, considering the horned king finds them useless, the new medailian works like the old, but even better since the dead knight was presumed a very great hero considering the great sword Taran found, however since it was made by mortal hand, i.e. Dark Cynder's, it won't free the darkspawn, cause the original was created by darkspawn hands, making that meddailian a dark spawn realic. however, the replacement is still a dangerious weapon.

Every time he finds a suitable moment of victory for the villain league, he sings in the Dark of the Night, which has already been sung 3 times (the 3rd time was in Spongebob and friends go home on the range, but it was a flash back of a future that ended up never coming true due to the shell louge squad and other setbacks) the one prior and the other so far, in Spongebob and the hyenas gets lost, and now in Spongebob and friends finds the black cauldron. Don't try to make sense of it, it's a running gag. But perhaps that can be explained because whenever Cobra does this, he is usually in his Rasputin personality in his mindset.

In reality, Cobra is an original character invented by Scroopfan because he felt that Cynder should not be the actual real villain and he felt that there ain't alot of Spore or origenal characaters in crossovers and that is mostly just characters made from varies medias. Cobra is, however, a mangling of personalities of villains that Scroopfan finds to be his favorites. Cobra is a combo between Rasputin,Tai Lung, Scar, and Malefor, to name a few. Cobra also has the desgination of a Lord because he thought it sounded intimidating.

Currently, he returned yet again in The Wild comment rp, where he and the Villain League tried to destroy Samson as part of Kazar's sacrifice to the darkness and reveals a frightning truth about Kairi's Mother queen Kanji. after the battle, Cobra is revealed to be one of Seven Horicrux, made of splict versons of Cobra's dark soul, caused so by Malefor, for, reasons yet to be known. However, Lord Cora's end and reforming in the Spirit Away rp was not part of T-man's original script. No-Face who takes his life will meet his defeat early which sends his host Fagin, to Prison 42. Cobra will instead remain evil and reveals to be a full pledged seeker of darkness helping Master Xehanort and Malefor assemble the Thirteen Seekers of Darkness to completey forge the χ-blade using Spongebob's soul after he dies along with the Clash with the Fourteen Guardians of Light. After battle ends with Alex and Gia subduing Cobra's pet, The Jabberwocky and saving Kairi's life using Trapeze Americano, Cobra and Mirage retreats with the Villain Leage and their Organization XII and swears revenge while Master Xehanort informs the Shell Louge Squad that the future clash between the fourteen lights and thirteen darknesses is inevitable and bids them farewell as he looks forward to the start of the battles and Spongebob's future demise which will create the χ-blade and disappears with the leage. 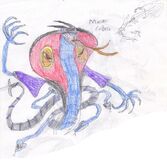 Cobra, if he actually appeared in Kung Fu Panda 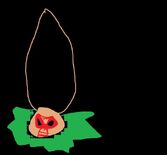 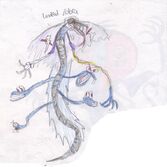 Add a photo to this gallery
Retrieved from "https://spongebobandfriendsadventures.fandom.com/wiki/Cobra?oldid=177963"
Community content is available under CC-BY-SA unless otherwise noted.