Coldaron is a world which is known for being a snowy landscape with a great community. It is mainly populated by pale-skinned human Eskimos which have been on this world for thousands of years, and they share a great life with the sentient animals of the planet, as well as the immigrant humans that have built ice kingdoms across the lands. Magic exists here and plays a cultural significance in both societies. There are several kingdoms across the world, and each respect the territorial space of the Eskimos. It is also the hiding place of an ancient artifact created by the famed Snake Tribes.

This planet was created in a much different way than Earth. It started out being an ocean planet where life started their evolution. However, too much volcanic eruptions lead to chemicals blocking out the Sun's rays, and causing the planet to freeze at the exact moment that mammals first evolved. As a result, cold-blooded dinosaurs never evolved since their ancestors couldn't survive the cold, yet mammals were able to flourish and evolve into prehistoric mammals, and some even different than what we commonly associate with. But not all reptiles died out. Birds were able to evolve rather well and combat the cold.

Though this world was forever trapped in an eternal Ice Age, it didn't mean that it was covered entirely in snow. Some areas were warm enough for plants to flourish, and make oxygen for the atmosphere. Humans were even capable of existing, and they could combat the cold very well. They became tribal pale-skinned beings with an Eskimo-like culture. The Snake Tribes under the rule of Count Fangula came to the world and were hailed as gods and were given priase and sccrivices. However, this didn't lasted for long when the High Council lead the natives against the Snake Tribes and flushed them out of the planet.

Though other-worldly beings found this world a perfect place for settlement, yet they first had to try negotiating with the locals. At first, they didn't get along due to conflicts about who deserves the land and who doesn't. The feud inevitably resulted in a summit that meant that colonies should be established far enough from the Eskimos' territory.

So both the Eskimos and the settlers shared the world for themselves. Several kingdoms were established across the world, some on high mountains and others out in the middle of snowy glaciers. Even sentient animals were allowed to make their own colonies. The kingdoms' first king was the same person who ended the conflict. His son took his place following his death, and his lineage had been passed down for generations until democracy was established. Thus the first king's family became a major part of the new government. Civilization had adapted very well ever since. No conflicts had occurred with the indigenous people for thousands of years.

Coldaron, due to the amount of sulfur dioxide in the atmosphere that blocks out sunlight to allow a decent amount of warmth as a result of the massive prehistoric volcanism, is forever trapped in an eternal Ice Age. Though there are some areas that get a fair amount of warmth so life can flourish on the planet due to some areas in the atmosphere that were cleared of sulfur dioxide, yet most of the atmosphere is not clear, and therefore unable to get warm. Snowstorms are very common and the temperature goes up at the same temperatures as Antarctica. Also, the planet is inhabited by not just other-worldly beings and the indigenous Eskimos, but also Ice Age animals such as mammoths, saber-toothed tigers, American lions, cave lions, Wooly rhinos, Glyptodons, ground sloths, dire wolves, dodos, Irish elks, terror birds, and many others. However, the alternate evolutionary time period allowed for newer Ice Age mammals such as:

The tribal villages of the planet are populated by the indigenous Eskimos which evolved on this planet. They have introduced several gifts to the other-worldly settlers such as the gifts of magic, which are used more in ceremonies than anything else. The Eskimos have their own language that the other-worldly settlers have learned in schools. The settlers have built their own massive kingdoms which soon turned into a democratic society in later years. Each kingdom was governed by a president, and is ruled by a Council that consists primarily of the descendants of the first king of Coldaron. The kingdoms have their own royal guards which are very diligent and far-watching, having a hold in each square kilometer of their kingdom. Sentient animals have the same community structure as well, and co-exist with the settlers and the Eskimos. 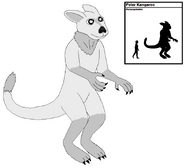 Pachytherium 'Frilled Pig'
Add a photo to this gallery
Retrieved from "https://spongebobandfriendsadventures.fandom.com/wiki/Coldaron?oldid=161169"
Community content is available under CC-BY-SA unless otherwise noted.