Start a Wiki
Quidilin, AKA Darkness Qui, is a dragoness who is believed by herself and pretty much everyone else to be an alternate universe dragon-like creature called a "Zewinsaur", who were creatures of a near simular nature, that is one of, if not one of the more powerful and high-ranking (but low compaired to the true founders) leaders of the Villains Act, who soughts revenge on Spongebob after destroying her paridise of villianly in the alternate universe. she is one of the major villains in the Cronitcles series. She is later revealed to be the biological mother of Cynder. She has her own personal line of "Starbot" drones known as "Qui Drones", of which which served her throughout the series unquestionably even to their eventual end.

PTE Redux Conditions: Since there is no AUU in the PTE Continuity, Quidilin is instead going to be bitter about losing her daughter Cynder to Malefor, which earns her distrust in any and all heroes and High Council Members. She would try to disband the Punch Time Exploders and the hero teams allied to them in retaliation as a result, similar to Pete's role in "House of Mouse".

Qui was born after her biological parents were lost long ago, and her egg was recovered by a young Professor Eagle Beak. He knew that Dragon Realms scarlet dragons are incredibly rare, and are said to only be born in a time of true peace. Yet Eagle Beak discovered that scarlet dragons could also be born through magical means through genetic spells to alter the makeup until a scarlet dragon is the result. Thus, he used the gene-altering spell on Qui's egg to turn her from a blue dragon into a scarlet dragon as a means to prepare against Nightmare Moon, and for a while, he began to bond and nurture with her. But then, royal Griffin Guards came and soiled Eagle Beak's reputation as a trusted griffin sorcerer and he was forced to make a living as a collage Professor where luckly, his ansistery that immegrated there were great friends with Celestia. Meanwhile, because Eagle-Beak created a Dragon Realms scarlet dragon, she wasn't Equestian by right, and the poor dear was deported to the Dragon Realms and was adopted by new parents. As the years passed, Qui grew, got married to a blue dragon at age 20, had a few liters of eggs, and another one 16 years later, one of the eggs in the second batch being Cynder's egg. Her husband has a son from a prior mate that was lost in a battle against apes.

However, when dark forces from An Alternate Universe found this united universe, they had an interest in Qui alone due to incredable rumors. This evil, was the Villains Act. They sent someone named Xerxes XX to capture her. Quidilin didn't want to give up so easly, so she and her husband fought the strange lizard-like people, only to have Quidilin's husband killed. Quidilin, mourning her husband's death, fought the invaders until Xerxes over powered her with a disabled ray. Xerxes was instructed to exterminate all ties by destroying 14 of the 15 eggs, sparing Cynder's cause he deemed it pointless since without parents, it was destin to die, unaware that the son of Qui's husband was still present and hiding, and Xerxes took Qui back to the Alternate Universe with him. After that, her egg that had Cynder was cared for by the dragon guardians it was brought to the now broken older brother, until Gaul arrived and took Cynder's egg.

In the Alternate UUniverses, Quidilin wakes up with no memory of who she is, or what happened to her. She was even given a Peerdonian plastic surgery that disguised her real dragon body with characteristics and shapeings of a Zewinsaur. She was then confronted robed strangers, who named themselfs as the "hidden" founders of the villains act, who tells her that her name is Darkness Qui, and that she was a villain leader planning to lead Alternate UUniversal domination, and that she is a banished Zewinsaur who desistated a local tribe over a fued, and had resulted with her being punished by life-long sleep until Xandronian and Jling freed her. After believing the lies, Quidilin accomplishes this, and leads the Villains Act, prompting the humans living in the world to flee to another dimension. This eventally included the likes of many villains, including her partners in crime, Celsius and Narcotic.

In the false history, Qui was borned to a prestess mother and a royal guard father, both under the service of the grand Zewinsaur elders. She was only a yearling during a desistating feud between rival Zewinsaur tribes, her tribe, and the one of the southen west. The violence lead to her father's death, and her mother kidnapped to become a sex-slave! Her father's last words were "If you, had the chance to gain the power to punish all of your enemies and avage our family honor.... Do it........". She ended up being raised by the Zewinsaur monks after the tribe feud was brought to a powerful end, but her mother was long lost. She was trained in the Zewinsaur ways of peace and tolerence, something the grand elders always had established between all tribes, as it is what was used to end the war. The ability to malmitulate a multitude of elements, was only so satisfying for so long for Qui... She wanted revenge on the tribe who took her mother, and her father's life. Secretly, she began to turn to forbidden arts of dark magic, and after learning enough, proceeded to rescue her mother... Sadly, she found out she was long to late, and her mother died of being mated with too much, and was long buried in south tribe grounds as a way to apologies for causing a feud. Qui, in a fit of heart-broken rage, desimated the entire southen west tribe, and barely left any survivers capable to be a threat... She had the decentcy to spare the elderly and younglings, mainly because her corrul was with the chiefens respondsable for making a war, and the tribe's warriors and any of their young and capable families. She threaten to ensure no survivers remain if the next generation dared to threaten her tribe again, with this, the trumatised children bowed to her demands, espeically the chiefen's young prince. However, Qui's victory was bittersweet. She was punished and cursed into a sleep by the Grand Elders of her tribe for the practice of dark magic, and almost causing a new feud, and act of near-geniside. She was stuck in this sleep until the secret founders of the villains act revived her, and ask her to become the new leader of the act, and she had accepted, and eventally, rest's history. 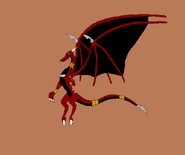 Qui in Flight and battle 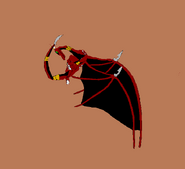 Dragon Somersault!
Add a photo to this gallery
Retrieved from "https://spongebobandfriendsadventures.fandom.com/wiki/Darkness_Qui?oldid=157888"
Community content is available under CC-BY-SA unless otherwise noted.