Demarcus S. DaMico the Δ is an Alternate UUniversal Kreeron from Planet Carbungia. He is a member of Team Positron with a Western accent and works as the team's engineer. He specializes in constructing and maintaining machines that provide support to his team, rather than fighting at the front lines. Demarcus' inventions have played well in the preservation of the team itself until they decide that they are ready for a new job, whether it be finishing what they started with Doctor Ogel, fighting new threats, or just an odd job in mercenary business on the side on their hiding planet of Iircen, Demarcus has made sure they stayed up-to-date in their efficiency. He provided them with teleportation pads, several types of sentry guns, a resurrection generator from long-out-of-date projects from Iircen's past to allow them to recover from death through training or on the job, the many training robot models of different firepower and variety, ammo terminals and household resource fabricators that use digital technology to provide them with the resources they need, and even efficient wireless connections to even the OmniNet, including an AI system called 'Thlirissa' that performs scheduling and reports anything of use and/or concern to the team. He also has the ability to fix any kind of broken machinery.

Demarcus was born on Planet Carbungia in a jungle-like community where he was raised by a hovercar mechanic father who inspired him to become an inventor. He achieved 2 science fair awards in school for creating genetically-perfect rodents and a reverse-engineered artificial womb, but decided to quit science fairs to make sure that other kids get a chance at it and not get jealous with his intellect. At age 20, he was able to apply for a computer company and was able to get so good in the inventing business and got his job at age 24. He was so good, he was recruited to be a military engineer for the Carbungia Rebellion against the Villains Act.

It wasn't long before the death of his father in the hands of the Villains Act left him so emotionally-scarred, he went mad and aimed to murder the leader of the invasion. While the invasion leader was pretty much an unlikable Carbungia-exile named Admiral Tesla, Demarcus still couldn't be forgiven for his gruesome murder of the admiral, even if they understood he was avenging his father. They were afraid that same rage could easily be used against them, and honorably discharged him to early retirement due to mental issues. This resulted in him getting shanghaied with Team Positron after they were amazed by his determination and his intellect. But now that he would be labeled a criminal cause of Ace's ill-gotten frame earned reputation, he was chosen to be a member for his own freedom, and has since become the team's engineer. He helped Ace the Alpha take down Doctor Ogel and stop his plans for the Villains Act. Since then, he's been a great addition to Team Positron. His inventions helped greatly in the battles against Ogel and the Villains Act. 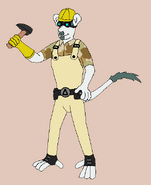 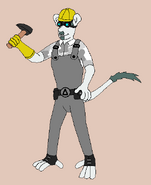 Snow Camouflage
Add a photo to this gallery
Retrieved from "https://spongebobandfriendsadventures.fandom.com/wiki/Demarcus_the_Delta?oldid=113767"
Community content is available under CC-BY-SA unless otherwise noted.