Don Karnage is the elite 2nd-in-command to Shere Khan and is currently a member of the Fang Empire. He is the foxy and cunning leader of a band of villianous Air Pirates. He is renown for his strange jumble of French, Spanish, and Italian accent, and his malappropriate use of the English language. Karnage fancies himself to be a swashbuckler, dashing and debonaire, but he's still a dirty rotten scoundrel, though he's really not evil, per se. He has a tremendous ego and constantly trips over it. He is very intelligent, and very quick to temper. He and his "loyal" band are all wanted criminals in the fortressed city of Cape Suzette. Noted among his followers are Dumptruck, Hacksaw, Ratchet, Gibber and Mad Dog. Kit Cloudkicker was once an Air Pirate as well. His secret hideout, Pirate Island, is located inside a volcano somewhere near the coastal city. His Air Pirates often patrol the outskirts of Cape Suzette in his flying fortress carrier called the Iron Vulture. There they lie in wait within the clouds for an unsuspecting pilots to pass so they can run an air raid. Karnage and his air pirates are a constant harassment for Baloo and company, as well. 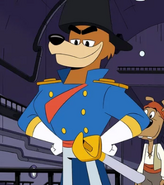 Don Karnage (2017 DuckTales)
Add a photo to this gallery

Don Karnage was recruited by Emperor Fang to serve as his general of the seas.

Retrieved from "https://spongebobandfriendsadventures.fandom.com/wiki/Don_Karnage?oldid=163865"
Community content is available under CC-BY-SA unless otherwise noted.