Eliphalet A. Kassidy the E is an Alternate UUniversal Gurro from Planet Acanthrox. He is a member of Team Positron who serves as a mumbling pyromaniac who has a fervent fondness for all things fire-related. He keeps a large flamethrower and flame bombs and is a master of arson. He was said to have gone insane and delusional after his house was struck by lightning and set ablaze, burning half his face off and causing a power outage that shocked him out from his Downer's Syndrome into arsonist insanity. This is why he must always wear a gas mask to hide his disfigured face.

Eliphalet was born on Planet Acanthrox, a planet with 2 moons and sparse climate change that caused massive tidal and weather chaos. Since his home planet rained a lot, he had to learn how to swim, and take emergency procedures on how to escape an emergency situation like when his AFT home of Gradosse falls to the flooded ground (which won't sink since all AFTs on Acanthrox are buoyant). Eliphalet was considered an outcast because of his Down's Syndrome (Called Downer's Syndrome in the AUU) making him be as smart as a 5-year-old. Nevertheless, he was still self-aware and had feelings. However, when he became 15 and one of his bullies had recently got him suspended, his house was struck by lightning, and set on fire. While he almost made it, he failed, and not only was he shocked by a power outage, but half of his face was burnt off.

Not only did Eliphalet have to wear a ski mask because of his disfigured face, but his Down's Syndrome was surprisingly cured, but not in a normal way. It made him revenge-hungry, and he became a pyromaniac. After he started using lightning rods, conveniently next to the houses of his bullies, to set his bullies' houses on fire, he was arrested for arson. But instead of jail, he was placed in a rehabilitation center on Oranos because his bullies were discovered to be Villains Act secret agents plotting to usurp Acanthrox's government by using those same lightning rods to cause fiery destruction, which would be a scenario where poetic justice was having a date with dark irony, meaning that Eliphalet unintentionally saved them. However, it was still a crime due to the facts that Eliphalet obviously didn't know about it prior, and the Villains Act would've seeked horrible vengeance on the planet for hailing the murderer of their agents that they know they can't be able to protect well enough on their own. Not to mention that the rods were VA property, and therefore contraband, so he had to stay there for rehabilitation. He stayed there for 3 years until he escaped, and was never heard from again. He soon unconventionally joined Team Positron when Ace the Alpha deemed him a worthy agent of destruction and mayhem despite his teammates' objections. Eliphalet helps him defeat Doctor Ogel, and has become a great psychotic hero ever since. 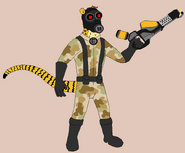 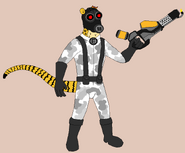 Snow Camouflage
Add a photo to this gallery
Retrieved from "https://spongebobandfriendsadventures.fandom.com/wiki/Eliphalet_the_Epsilon?oldid=173387"
Community content is available under CC-BY-SA unless otherwise noted.