Start a Wiki
Elowen Cassarole the H is an Alternate UUniversal Norbil from Planet Shigaea. She is a beautiful member of Team Positron, the second member in fact, and serves as the team's stealthy spy. She has a French accent, and is the only female in the team. She relies on stealth and trickery to aid her team. As a female, she attracts the attention of her entire team, but prefers to be single. She has an entire arsenal of equipment such as a cloaking device that allows her to camouflage into her surroundings undetected, a hologram disguise allowing her to take the identity of anyone she kills, even gaining his/her voice, night-vision goggles, vibroknives and two dual laser revolvers.

Elowen was born on Planet Shigaea in a French-like community with a single mother who worked as a member of the Shigaean Interpol. Elowen was considered to be very attractive in her school, even to her teachers (but not in a pedophilic way). When she grew up, she got a job in Interpol as a spy after her mother died of a terminal illness. As she served for 7 years, she was soon chosen by Oaxa to serve as one of their members after her reputation earned her grand praise, especially for Ace the Alpha. But her flirts in the school have left her to become hateful, and personally stressful, about being flirted on. She was very rough on flirters and Ace learned the hard way to respect that.

But over the years, she and Ace developed a friendship with each other. She eventually became his partner in defeat the Yellow Revenant, and actually takes his side when Doctor Ogel frames him. For this, she is fired with him. The military that fired them found out too late that they had been punked when said military was later destroyed by Ogel and some goons days later just for the sake of Ogel being the sociopath he is. She decides to accompany Ace on his quest to founding Team Positron, and became one of it's best fighters. She manages to become the spy of the team, and gains a lot of equipment and helps Ace find suitable members starting with Taggart the Theta. She helps Ace defeat Ogel, and they continue their career as the mythical Team Positron. 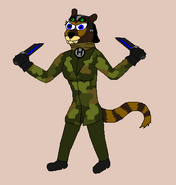 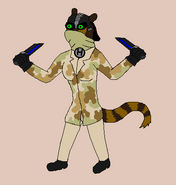 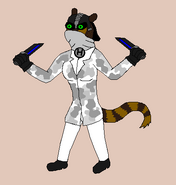 Snow Camouflage
Add a photo to this gallery
Retrieved from "https://spongebobandfriendsadventures.fandom.com/wiki/Elowen_the_Eta?oldid=176443"
Community content is available under CC-BY-SA unless otherwise noted.