Start a Wiki
Emperor Fang is the secret evil twin brother of Sir Hiss, and an evil Mage who studied on the dark arts, influensed by the Makuta, but became powerful enough to even summon darkspawn warriors from Bionicle. Emperor Fang is set to become a new Enemy and in fact, ruler of his own Empire, called the Fang Empire. But despite this powerful intro, he, too, is not original. In fact, his personality is just like Ruber if he were a snake, and he even sings like him too, and even a mild dose of Scar, with consideration from the new Wrath of the fang empire intro. But despite this, Fang will eventually prove his worth when he intends on capturing the generater to the boundaries, and enslave Team Nefarious because they're just there. he is also after the Kronus Stone, on orders from the Makuta, but for what remains to be realised. He may even be a threat to the villain league. But Mirage doesn't think that way and is even unimpressed by this evil brother of Sir Hiss. But still, she plans to get rid of his independent mind and recruit him forcefully into the villain leage so the Rakshi, the Dark hunters, and the Vaki army will be with the villain league. 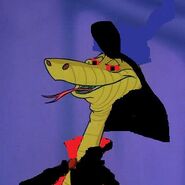 an interesting fan art of Emperor Fang.
Add a photo to this gallery
Retrieved from "https://spongebobandfriendsadventures.fandom.com/wiki/Emperor_Fang?oldid=170885"
Community content is available under CC-BY-SA unless otherwise noted.