Fidget is a bat who used to be Professor Ratigan's right-hand man in Spongbob and friends meet the great mouse dectecive. till captured by the shell louge squad, and ultamately reformed. Fidget has several disabilities, notably his peg leg and a crippled wing which prevents him from flying. However, in the comic book, he seems to have overcome the latter injury. he is also bonding with (and/or annoying) Kung-fu Master Crane, who at first will find him to be a total pest, but will learn to like him later on, though it has not yet been shown. it is reveled by Kairi that he is Batty Koda's long lost Cousin.

Fidget is, at first, a cowardly, greedy minion in the employ of Ratigan. He is somewhat forgetful, as he left his hat and Ratigan's list (which allows Basil to track him down and find Ratigan's hideout, respectively) when he ran away the first and second time, respectively. He isn't a very good speaker, as he has difficulty with speaking properly about what happened to Ratigan's list. However, in the spongebob and friends siries, he has become a much better person, however, still sort of ackword when speaking.

In the beginning, he kidnaps Hiram Flaversham in their toy shop along with Scar, Zira, Nuka, and Shere Khan, leaving his daughter Olivia Flaversham all by herself. Desperate to find him, she sets out to find Basil of Baker Street, the only detective with the skills to find him. When she informs Basil that it was Fidget who kidnapped her father and that he was a bat with a peg leg, Basil immediately knew Ratigan was behind the kidnapping, and set out with Olivia and Dr. Dawson to find them.

Ratigan charges Fidget, Abott and Costello mouse, with kidnapping Olivia as a means of blackmailing Flaversham with her life, and a simuler thing with Kairi with Boy Sora and Spongebob, as he is needed to help Ratigan overthrow the Queen of Mousedom on her Diamond Jubilee, and his grand plan to release the darkspawn in service to the villain leage. Fidget also is charged with stealing tools and uniforms for Ratigan's gang to use when they overthrow the queen, and steals them from a local toy shop. Basil tracks him there, so Fidget disguises himself as a baby in a crib using only a bundle until Olivia, out of curiosity, comes across the crib and finds Fidget. He captures her but he, along costello and Abbot were captured.Fidget reforms cause he was already long cured by Kairi, with the discovery of his cousin Batty, but fear kept Fidget from willingly betray Ratigan cause of Savio and the leage.

Unfortunately, the villain leage was not so easily stopped by this, even when Scar ran off to avoid being discovered by Simba till Spongebob and Friends find the Black cauldron, as Zira said that if the Griffin fails to retrive the spear of atlantis (which he later did) they will settle for a full skale invadison. when it was stopped, however. Fidget joined the Shell Louge squad as their little sabitodtor, (dementreighted when Fidget intervine Fagin, Darla, and his former Master, Ratigan) and to read incoming messages, due to footage of him looking at paper.

ferther roles in the series

aside from what is mentioned, Fidget is also one of the comic releif characters, defeluped like that jokey little brother personally within the louge. in Spongebob and Friends meet Hercules, Fidget ended up on Shifu's badside cause of Fidget dropping the key to the oylimpus gate when Pain and Panic and the Frog Hunters came, with Shifu replying that he has to "Do something incredable" to earn back his respect. Fidget mad it worse when he blabed about the map, which furiated Shifu, turning him to almost became Ratigan (hence the fact he said Fidget in Ratigan's voice). but what finally did it is when Shifu learn that the earlier mistake was even more grave, when Meg was reveled as the soul slave to the leage, which pushed Shifu over the edge, and said that he is no longer a member cause of Fidget's idiotcy and incomidents, (and the fact he let Hercules go with Meg while Fidget went to get Pocket Pitas cause Meg simply mentioning them didn't help Fidget's case) and for this, incredable act involed Fidget risking his life (and remaining limps, I.E. he already has a peg leg) to retreve the map to Merlin, only to fail when Tai Lung captures him. when in danger of being corrupted by Fagin, Fidget goes into a dance (at first started out with a very bad joke) to try to make them not corrupt him and even lose intress of making him evil again, but really resulted of trying Fagin's pathince, but also, appearently distracted him and the other villains enough for Batty to ram into fagin and to be chased by him, and after the other villains with Tai Lung were chased off, Fidget was with Po to get back the map from Tai Lung. Tai Lung brifly had the map before Fidget threw a toy knight that smashed into Tai Lung, which gave Po enough time get up on his feet and finish off Tai Lung. This incredable thing, two if you count the fail map retreveal atempt, earned back Shifu's resecpt, who was already willing anyway from persaytion of Girl Sora's words of wistim.

this revels that Fidget reforming is not actselly an origenal idea by Supervideomaniac/scroopfan as he thought, turns out, there was a comic that shows a more alternate reformnation of Fidget.

During a comic taking place after the movie, he has not only survived, but also reformed helping out Olivia. When Olivia heard about the Sideshow Sea Beast, she called him and Toby and head out for the carnival. He told Olivia that the beast is the talk of the show and that he used to work at a carnival. Fidget even showed Olivia how some of the tricks are done. Once he showed her the attraction, the monster got angry and held Fidget captive. Olivia saved his skin by carrying a chum bucket of fish guts, which is the beast's dinner. After the beast threw Fidget, Olivia hoped Fidget remembered that he can fly (how he got to fly again was unknown). Once the beast went back to the ocean, Olivia and Fidget celebrated with caramel apples. He probably reformed because with his boss Ratigan gone, he was pretty much lost and had no where else to go. Another suggestion is that he had enough with crime. It is also known that they solve other mysteries, but what they are is unknown. 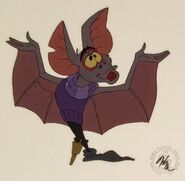 "No Problem! I got it RIGHT HERE!" 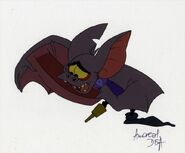 Retrieved from "https://spongebobandfriendsadventures.fandom.com/wiki/Fidget?oldid=146666"
Community content is available under CC-BY-SA unless otherwise noted.