Fluttershy is a female Pegasus pony, and one of the main characters of My Little Pony: Friendship is Magic. She lives in a cottage near the Everfree Forest and is an animal caretaker. She is very shy, timid, and also very gentle and weak, but her ability to communicate and interact with animals make her a strong girl. She represents the element of Kindness

The episode The Cutie Mark Chronicles offers a glimpse into Fluttershy's past. Like Rainbow Dash, Fluttershy hails from Cloudsdale. As a filly, she was a weak flier, and was harassed by the same Pegasi who were jeering at Rainbow Dash in Sonic Rainboom, and they nicknamed her "Klutzershy". She was taller and ganglier than the other foals, with slightly larger wings. Rainbow Dash flew in to defend her, and challenged the bullies to a race that caused the participants to unintentionally knock Fluttershy off the clouds and fall to the ground, a place she had never been to or seen before. She was saved from a rough landing by falling onto a large swarm of butterflies. Upon seeing the animals and the greenery for the first time, Fluttershy becomes overwhelmed by the beauty of it all and starts singing. A few moments later, Rainbow Dash's sonic rainboom startles the animals and scares them into hiding. Fluttershy earns her cutie mark after interacting with the animals and realizing her ability to talk through to them, making her special connection with animals her sole purpose in life.

Fluttershy is an ally to the Shell Lodge Squad along with her other friends. Even though the Shell Lodgers hate her timorous nature, they do deem her a hero for her ability to communicate to animals. she has a tragic circus related exspearience thanks to El Amazeso. She knows how to handle a great white shark by giving it what it really wanted: some leftover chicken. Fluttershy is compelety terrified of almost anything like dragons (Besides, Spike, Spyro, Cynder, Mushu, Toothless, Devon, Cornwall, Haku and Taiku), having her feelings hurt by puplic humiliation and getting laughed at, terrified on both Nightmare Night and Halloween and she's even scared of a crew of pirates lead by a big pirate ape like Blot. At the beginning of Chronicles Season 2, she starts to get a bit curious to different environments, specifically the sea, an environment she has never explored before. After an accidental overboard incident, she becomes so fascinated, she becomes a perfect savior for Equantica, an Equestrian merpony city cursed into being sent to Destiny Islands waters thanks to Discord, and even her added achievement of reforming him helped quite more. She was given a merpony body and was sent to Equantica, where she used her kindness and the assistance of her friends to help them get past their problems and flaws, specifically that of Equantica's princess, Princess Marenia, all while getting to achieve her wishes along the way. When the city was rescued successfully since Discord joined in her cause, the Mane Six gained pony auras that allowed them to gain merpony fins and the ability to breath underwater (later modified to only be effective in saltwater), but are not merponies at a complete level. However, this form is later destroyed during the MLP 2017 Movie when Tempest Shadow uses her power to destroy all the Mane Six's merpony forms to ensure they do not play against them, as it will be replaced by her seapony form by Queen Novo. 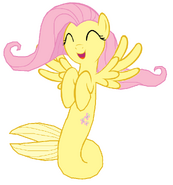 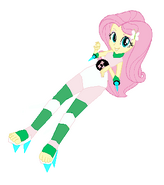 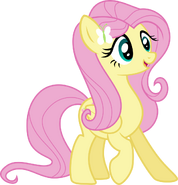 Fluttershy (Humanized) (Original by BerryPunchrules)
Add a photo to this gallery
Retrieved from "https://spongebobandfriendsadventures.fandom.com/wiki/Fluttershy?oldid=143042"
Community content is available under CC-BY-SA unless otherwise noted.