Start a Wiki
Fu-Xi is a character that has appeared in the Kung Fu Panda: Legends of Awesomeness episode 'Serpent's Tooth'.

Once, Fu-xi was a brave and noble warrior, regarded by many snakes as a hero and treated like a lord. Fu-xi defended others with his incredible skills and fear-inducing venom. But when others regarded him and his kind with paranoia and hate, Fu-xi changed for the worst, taking on a racist hatred towards "two-leggers" in retaliation for their violence and persecution. He came to view himself as a defender of serpents, considering the ones that went along with him as his brethren, but having expectations of his kind, saying they should be strike fear into "two-leggers", and to be prepared to strike at them by any means necessary.

Fu-xi saved Viper from some paranoid villagers who attacked her simply for being a snake, and revealed he'd heard of her, the "Great Master Viper of the Jade Palace", addressing her as "little sister", for in her he saw a potential ally/apprentice.

He subtly demeaned her a few times for fighting for "two-leggers", trying to convince her she should fight against them and side with him. Fu-xi regarded Po as just another "two-legger" to get rid of, and used his unfavorable comments about snakes in efforts to sway Viper to his side, and he violently tried many times to kill him. However, trusting Viper just for being a fellow snake proved to be his downfall, and eventally, his plan fell flat on it's face.

Ever since his defeat, Fu-Xi has sought to get revenge on Viper and Po and these, 'Lodgers' he began to hear about. That least, he originally did until he began to understand more about Viper's "Strange compassion for leggers" abit more, and just spied on them for curiousities sake. However, this also brought undesirable attention from Lord Cobra who soughts to make him part of the leage. But soon, an unexpected twist will surprise everyone. Throughout the episodes prior to Opening A Can of Snakes, it would be reveiled that he has some acclopises that, hypocritcally for him, are not snakes, spying on the progress of the Lougers from Discord's Dilemma, to A Rattling Regret of a Rattlesnake. The names of these acclopises are Mo Tong, (Who Fu-Xi has an imapprobeate habit of naming "Squeakers"), a mouse, Rash and Teddie, two delinqent possums, and Fire, an uptight, snarky, no nonsense dragonfly, all of under the care of a kind-hearted, redemption beliveing Golith beetle sage named Lady Su Ming Cao. He also has a list of personal enemies that would no doubt, appear into the series, in due time. It's also revealed that his past and snake discrimination in general stems from mongooses, who are the only creatures capable of fending off snakes with their speed and immunity to snake venom, particularly Su Su Ka Boom, his arch-nemesis who left the impact that caused his family to be killed, including his wife Nu-Wa (Voiced by Fuxi's voice actor's albeit-long-retired wife Wendy Fulton), whose soft and hesitant tone and singing voice is overclocked by her infamous fighting style, and yet she was killed with the rest by the mongoose leading the charge that killed Fu-Xi's family, and her voice is rather similar to Fluttershy, which results in him falling in love with her to his own surprise, and it's revealed that he even has an evil more xenophobic brother named Pao-Xi, who was locked in the underworld for his crimes and is essentially an untamed version of Fu-Xi. 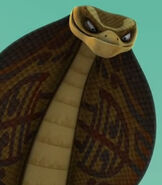 "Bitch, you're just jealious of my swagger."

"Ya know, if your gonna bitch at me for whatever badass thing I do, you'll never stop bitching."
Add a photo to this gallery
Retrieved from "https://spongebobandfriendsadventures.fandom.com/wiki/Fu-Xi?oldid=146681"
Community content is available under CC-BY-SA unless otherwise noted.