Gaston is a recently recruited member of the Villain League, and is the main villain from Spongebob meets Beauty and the Beast.

Gaston is strong and handsome, and is all too aware of this. He is hailed as a local hero, desired by many of the young women of his village, despite his rather boorish exterior. Given his narcisstic nature, he revels to boast about this when the villagers begin singing a song about him. When it comes to women, he proves to be extremely vain and misogynistic, demonstrated by when he repeatedly attempts to spend time will Belle, only for them to end in disaster due to his sexist behavior. He also believes that women are only good at being wives and mothers (especially of sons in the latter), something that Belle is disgusted at becoming until she marries Beast.

However, despite this, he is far from stupid or brainless as Belle claims. Underneath his exterior lies an intelligent and cunning mind. This is first shown when he formulates a plan to blackmail Belle into marrying him by bribing Monsieur D'Arque, the owner of the local madhouse, to threaten to lock Maurice up. When this fails, Gaston again uses his intelligence to instil fear into the villagers by fueling their paranoia about the Beast's "monstrous" nature, and easily gathers a lynch mob to attack Beast's castle and leave none alive.

Role in the film

Gaston starts off as the local hero of a small French village, pursuing Belle through the village as she borrows a book from the local bookstore. Their meeting starts off well, but Gaston's sexist remarks about women drive Belle away from him and she goes home, leaving him disappointed. The next day, Gaston organizes a wedding outside Belle's garden in an attempt to "surprise" her. He forces his way into Belle's house and attempts to strong-arm her into marrying him, again making sexist remarks about women. While he attempts to corner Belle, she manages to open the door that he has pinned her against. This causes him to lose his balance and fly headfirst into a mud puddle that lies in front of Belle's house. Furious and humiliated, Gaston storms off.

That night, the villagers in a local pub, along with LeFou, sing a song about Gaston's greatness to cheer him up after being rejected by Belle, when Maurice storms in and warns the villagers about a monstrous Beast who has locked Belle as a prisoner in the tower of his castle. Thinking he is talking nonsense, Gaston orders the villagers to throw him out of the bar. In a surprising display of animalistic cunning, he bribes the owner of the local asylum, Monsiur D'Aquire, to threaten to throw Maurice into the asylum in order to pressure Belle into marrying him. While D'Arque realises that even Maurice's nonsense about a beast and his odd inventions do not make him insane or dangerous, he is willing to accept the bribe. Considering the management of asylums of the 18th century, this is an extemely harsh threat.

However, just before they arrive, Maurice has left for the castle on his own. LeFou is ordered to stay there and wait for their return.

Belle, however, manages to prove her father's apparently insane claims about a Beast inhabiting the huge castle in the woods to be true by using a magic mirror the Beast had given her. Gaston grows even more frustrated after his plan fails and shocked that Maurice was indeed telling the truth, but becomes increasingly jealous upon learning that Belle has more sympathy for the Beast than for him.

In his jealousy and pride, Gaston convinces the villagers that the Beast is a man-eating monster that has to be brought down immediately, and after locking Belle and Maurice in the cellar of their home, Gaston leads the lynch mob to storm Beast's castle and leave no one alive. In the ensuing battle between the rioters and castle servants, Gaston confronts the Beast alone. He fires an arrow into him, tosses him onto a lower section of the roof and taunts him. When Beast doesn't respond, having lost his will to live since Belle's departure (to rescue her lost father, who was searching for her), Gaston uses a makeshift club to try and kill the Beast. The Beast, however, regains his strength when he sees Belle return, and viciously fights back. Gaston proves to be an even fighter, and declares that Belle is only his, and that she could never love a beast. Enraged, the Beast lunges forth and he soon has Gaston at his mercy by holding him above a chasm by the throat, and the evil hunter pathetically begs for his life. The Beast realises that now Belle has returned to him, he doesn't need to kill Gaston, and merely tells him to leave. In spite of this, when he sees Beast embracing Belle, his great hatred and jealously arises. Determined to kill the beast once and for all, Gaston literally stabs Beast in the back with a dagger while dangling precariously from the balcony. The Beast rears backwards in pain, causing Gaston to lose his balance and fall screaming from the roof to his death.

Richard White stated in an interview that while he himself doesn't know whether Gaston survived, he does mention that the viewers never saw the body, implying that he might have survived. However, the 2002 DVD commentary confirmed his death, and mentioned that the skull and crossbones seen in his pupils as he falls, which were speculated to be some sort of demonic subliminal message, were intended to confirm his death.

Gaston was recruited into the Villain League thanks to Fagin the darkspawn bird who corrupted him using Gaston's oppsesstions of Belle, who turns out to be a princess of heart. Despite his demise, the Villain League still keeps his soul on tabs as a commando of the heartless. 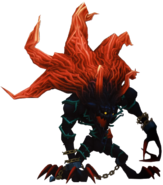 The Shadow Stalker Heartless - The Heartless that fused with Gaston
Add a photo to this gallery
Retrieved from "https://spongebobandfriendsadventures.fandom.com/wiki/Gaston?oldid=134795"
Community content is available under CC-BY-SA unless otherwise noted.