Start a Wiki
Gifford O. Labbs is a lab rat from SpongeBob's world. Hailing from Miami, Florida and born at Miami's Johnson & Wales University. He worked with sciences since being turned into a lab rat for 10 years and being a valedictorian at science colleges, he eventually moved onto working for Treedome Enterprises Limited, where he went to the Pacific Ocean, and did work for over 20 years. He is a genius in virtually any form of science imaginable, and given his enhanced intelligence and biology, it is an accurate description. He has never met fellow employee Sandy Cheeks, but he only knows her as the nearest Treedome Enterprises employee to his location. He started off his career in the Majuro Atoll where he interacted with the sea and land life residing among the atoll, and later moved near the Bikini Atoll, where he eventually found a life of aiding the anarchic city of New Kelp City, which the underwater inhabitants only said was a bustling metropolis until he saw it for himself. When seeing it in danger and under the criminal rule of Mister Bottomfeeder, he decided to help by transferring technology from his Treedome on Majuro Bottom, which was far more advanced than Sandy's, adapted to fit sea and land animals due to a humidifier bringing moisture in the air, and s filled with a tree, is much larger, and is like an entire facility where much of the monuments and supports are made from garbage, and has an AI, based on bubble technology accidentally discovered by the rebellion and creating bubble-based defenses and offenses. Gifford is also quite an athlete and martial artist on par with the Rats of NIMH who practiced Kung Fu as opposed to Sandy's karate, and has enough experience to even best her in combat, which is why he often times finds himself fighting in New Kelp City once or twice. He is also a close friend to Kenny the Cat, who appeared in the SpongeBob series as a cat who posed as a fraud by being a cat who can hold his breath underwater for a long time while constantly using an oxygen tank in private, and later Sandy kicked him out of Bikini Bottom. He once tried to eat him until he took notice of his Kung Fu skills, and following his episode appearance, ends up helping him on Majuro Atoll, while also secretly having a personal goal of his own following his humiliation in Bikini Bottom involving an illegal AUU smuggling operation focused on aquagens, or AUU drugs that grant people temporary aqua-respiration abilities for usually a whole day, through an Iobrog smuggler named Jagom von ger Bathyms. 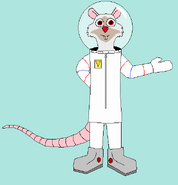 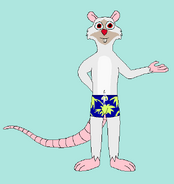 Gifford in Swimsuit
Add a photo to this gallery
Retrieved from "https://spongebobandfriendsadventures.fandom.com/wiki/Gifford_Labbs?oldid=119773"
Community content is available under CC-BY-SA unless otherwise noted.