Start a Wiki
Globex Industries is an Alternate UUniversal company founded by the United Sentient Races Alliance (USRA) in 1169 AD and currently run by an Ohrugan named Professor Glitz Sirius. The company has been made to be the main research company of the AUU, and is still in existence. This company has been in many forms of scientific research throughout the decades, and when the USRA crumbled in 1884, Globex was closer to being shut down until it was renewed by the races when they needed it during the Interuniversal War. This company has even been brung into The Tranquility Zone and has founded hundreds of colonies on several planets and moons. Globex Industries in the AUU were either kept in check by sentient animals, or abandoned entirely.

Several years after the Xurons have joined the USRA after their gratitude for allowing them to repopulate their species, the USRA, with their help, decreed that a governmental company be created so that their power could be made stronger. And so, a Nardiraythe human named Dr. Karana Globrunx stepped in and offered the chance. He and his other associates: a Trobeen Naroudan named Uhu Orheilm, a Rabodan named Ninclede Trynthe, and a Cunone named Lomb Inthuni, gave the USRA over $80,000,000 in exchange for them to own the company. And thus, Globex was born.

Globex was indeed successful, boosting the economy, technology, agriculture, and architecture of every race in the USRA. Project after project, the races became more sophisticated. But once Dr. Globrunx died, his associates took his place, and after they each died generation after generation, more people took their place. However, thanks to a few irrepondsable and even greedy CEOs that harmed Globex's crediability with their greed and selfishness, ended up making Globex respondsable for the horrendus Exo-Wars, in thanks to wronging Dr. Armalite Infernus, a genius who took his butt-hurt from the rotten CEOs much, MUCH worse then previous victims. After it was won, it was bittersweet a victory for Globex cause, since the company was tecnecally respondsable for a horrorable war, the corrupt CEOs were fired and the "Infernus Rule" was introdused to discourage future mishaps, even dispite being ironicly respondsable for causing a branch to go rouge and become Corruption Co. later down the road sometime in the future, and Globex's credability's suffering was also the suffering of their profits.

However, after the Third AUU Cartoonian War, Globex began to crumble even more due to the USRA coming to a tragic end. If it wasn't for the Interuniversal War that followed, Globex would be gone forever. Once the war was over, Globex was restored to it's original glory by the newly formed Human Protection Agency (HPA), and by the time the Villains Act was in it's prime, Globex had to be split into two for The Tranquility Zone and for the AUU. The other former USRA alliances kept the remaining Globex facilities up and running, as well as a few sentient animals. Some facilities are abandoned, though. And would remain that way until the Humans return, and the restoration of these forgotten relics will be among the first things to be done around here.

Founded by Uhu Orheilm, and currently run by Doctor Cryptum, the Robotics Division specializes in robotics and machinery. It was the most useful division during the Exo-Wars and the Interniversal War, creating over a thousand war machines, each with different capabilities and designs, as well as creating minor inventions and computers essential for the wars. The projects that were made here include:

Founded by Ninclede Trynthe, and currently run by Doctor Outremer, the Military Division specializes in the limited production of military technology including firearms, armor, and vehicles. All known weapon inventors and manufacturing geniuses have been a member of this division, and many types of military vehicles have been created here, even having assistance from the Robotics Division to do so. The projects here include:

Founded by Lomb Inthuni and currently run by Doctor Beaker, the Biological Division specializes in genetics, artificial evolution, and augmentation and trans-being technologies. This is how supersoldiers and new evolutionary beings have been produced, as well as helping de-extinct animals and beings, and create medicines and cures for diseases. Their projects include:

Globex Buildings in The Tranquility Zone

Globex Airpad in the AUU 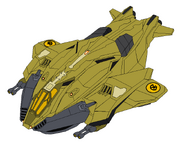 Globex Hovertrain
Add a photo to this gallery
Retrieved from "https://spongebobandfriendsadventures.fandom.com/wiki/Globex_Industries?oldid=94172"
Community content is available under CC-BY-SA unless otherwise noted.