Start a Wiki
Hank Jr. Spooner, or HJ is a young clone of Hank the Mutant Frog. He is a smaller and younger version of Hank, and is pretty much Hank's son. HJ looks like Hank, except smaller, and doesn't have four legs. And he has 4 arms, 2 of them attached to his shoulders. And unlike Hank, HJ's brain doesn't need to be contained, but for some bizarre reason, there's no fear of his brain growing out of control. He even gets a much better supervillain force than his father, having armored zombies, guard mutants and mutant steeds, and giant mutants that serve as a last resort, even having a mutant assistant named Payne.

HJ was born in one of Hank's mad inventions. The device was originally meant to create more Riberoia worms, however, after accidentally leaving his DNA in the machine by mistake, the result created Hank Jr. HJ didn't really start out as a tadpole because of being inside the machine for 3 days. When he came out, he was about 5 humans years old in frog years. Hank decided to raise HJ as his son, and started bonding with him. However, HJ was more evil than Hank was, and wanted his power for himself. So he stole his facility, locked him up in the cells, and took control of his new invention, the "MMAS" (Mutant Making Assault Suit). However, Hank managed to escape, flee POI-SON, and get help. Since then, HJ plans to control the UUniverses all by himself. He upgraded everything to the tiniest detail, and became just as fearful as Hank.

HJ, like his 'father', is a genius of genetic, biological, and technological science. He has built many kinds of deadly weaponry that aid him in his evil deeds. His self-defensive weapons are not just his experience in hand-to-hand combat, his high-jumping ability, and his long sticky tongue, but his wide array of energized weaponry, many of which include 2 plasma guns he holds in his upper shoulder appendages, a phaser rifle with attachable gun mods, and some portable weapons such as energy grenades, gravity grenades, and flash bang grenades.

His equipment include energy shields, healing cocktails, a built-in jetpack, and a flying chair that uses jet-thrusters to fly called the JPChair (The Jet-Packed Chair). The chair is equipped with a laser-lens eye, a shield generator, a cloaking device, a defense protocol, and 4 tubes that launch little probes that are equipped with razor-sharp cutting blade wings and laser guns. These probes are deadly in numbers.

His armies consist of a massive amount of armored zombies which are fitted with white armor made of carbo-ceramic reinforced titanium with laminated Kevlar, making them extremely bullet-proof and tough to halt. While the zombies are still as slow as a zombie and still talk funny, they are capable of attacking with one of several weapons including laser pistols, laser shotguns, laser rifles, grenade launchers, and electroshock rifles. They can think strategically, and they can attack in formations. His armies also consist of mutants, with the pinnacle of them consisting of 2 types: Dunthers (dog/panther hybrids) and Bacodiles (bat/crocodile hybrids). The Dunthers are agile and quick creatures which attack in groups, and Bacodiles are used for attacking in the air with cybernetically-detachable weapons. Other mutants consist of the Dominators, which are used as last resorts and superweapons. 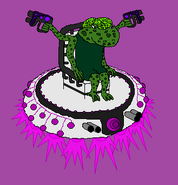 Hank Jr's Zombie Soldiers
Add a photo to this gallery
Retrieved from "https://spongebobandfriendsadventures.fandom.com/wiki/Hank_Jr?oldid=135113"
Community content is available under CC-BY-SA unless otherwise noted.