Start a Wiki
Hornets are Emperor Zurg's minions in Buzz Lightyear of Star Command: The Adventure Begins, and the subsequent TV series. They are robots, and resemble the Battle Droids from Star Wars, only bulkier and have blasters in their hands, and flight capable.

Zurg has also created various large hornets, like the Hyper Hornet he used on Tengea and the Mega Hornet he unleashed on Jo-Ad.

They currently serve Team Nefarious as their equivalent to Battle Droids alongside the Drej foot soldiers. The Hornets also have an Elite Mook counterpart to the Super Battle Droids to contend with the Beast Wolves and Dragaunus' Robots, the Hornet Sentinels.

PTE Redux Status: Unworthy due to Buzz Lightyear of Star Command being non-canon in the PTE series. 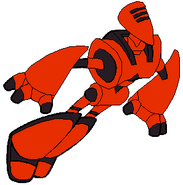 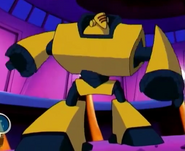 Mega-Hornet
Add a photo to this gallery
Retrieved from "https://spongebobandfriendsadventures.fandom.com/wiki/Hornets_(Buzz_Lightyear)?oldid=159112"
Community content is available under CC-BY-SA unless otherwise noted.