Start a Wiki
Iain Sprague the I is an Alternate UUniversal Porrin from Planet Tarvillion. He is a member of Team Positron, serving as the scout. Iain is a fast running scrapper with a snarky 'in-your-face' attitude. He is very rude, and seems to think he can handle anything. He often acts a lot tougher than he can actually prove to be, though he's certainly not weak. He carries an aluminum vibrobat, a variant of baseball bat used for low-gravity-based sports, particularly moonball, that can deliver a stronger blow than an average baseball bat. He also carries a double-barreled shotgun-like atomic blaster that has several functions for close-up assault. He also uses a long-recalled energy drink called 'Fizzybuster XXX', which was capable of heightening his skills through more sugar than the daily-recommended sugar intake, and the crazy effects of which caused it's manufacturer, the long-running Fizzer Beverages, to discontinue it and ban it's production entirely, though didn't stop bandits on Iircen from illegally producing it as an addictive beverage. Though it doesn't make him untouchable, the energy drink can allow Iain to become faster, vastly-reflexive to the point of technical invincible, and literally crazy. He often flirts with any female on Iircen he sees, yet this sometimes gets him in trouble.

Iain was born on Planet Tarvillion as the son of a baseball player father. Iain grew up with a liking for sports and baseball. He dreamed of joining a baseball team, and being famous. However, he tends to defend himself with self-taught moves when he gets attacked by bullies. Of course, he can easily scare them off by threatening them with his aluminum baseball bat. However, by doing this, he gets suspended for 3 days.

But even though he got the upper hand once, that upper hand got the best of him, and it wasn't an option anymore. But then, a new massive student named Drake comes, and appears kind in public, but in private, he is a bully who hurts kids and blames them on others. He was never caught in his life, and his next target was none other Iain. When Iain discovers this, he tries to warn everyone, but no one believes him, leaving him to suffer under Drake's wrath. When Drake comes after him, he runs for his life, but gets caught, and is beaten senseless. He is forced to never tell anyone about it because no one will believe him, and he will be beaten harder. When he continues this, Iain has had enough, and had no choice but to bash him with his baseball bat. But even though the Principal realizes that Iain was right and that he only attacked him in self-defense, he sends both Drake and Iain to juvenile hall for a month.

When Drake and Iain are released, Drake is put under probation and restraining order, and Iain is sent to military school where he gets a career as a military soldier since years of training have left him to forget his old dreams. He still carries around a baseball bat, but uses a double-barreled atomic blaster if things get too tough. Though the speed he gained from experience in sports and his cunning in the battlefield gets him chosen by Ace the Alpha when he gets fired for disobeying his commanding officer. With his tough personality, Iain helps Ace and the team defeat Doctor Ogel and become better than he ever used to be. 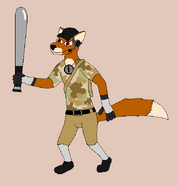 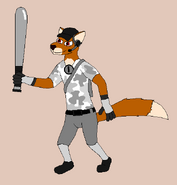 Snow Camouflage
Add a photo to this gallery
Retrieved from "https://spongebobandfriendsadventures.fandom.com/wiki/Iain_the_Iota?oldid=105867"
Community content is available under CC-BY-SA unless otherwise noted.