Start a Wiki
Miami G. Amalus is an Alternate UUniversal Ract from Planet Pharagu. She was born to a mother from Pharagu and a father from Breezso Prime who supported Centa's poor family before they died. Miami hated Centa's new adoptive father, Elder Lighthead, because of his outrageous revenge-hungry plans for making the USRA pay for their mistake, despite their signs of sympathy. Though when the Heroes Act and the Shell Lodge defeated him and Dr. Glowrod, Miami fell in love with their newly-recruited member, Nanobyte, and decided to join their ranks. She decided to become a saboteur just like Nanobyte, but because she wasn't as small as Nanobyte, she had another means of sabotage involving her father's yellow heavy-duty suit which includes adrenaline serums for resisting pain such as electricity, and a robotic gauntlet which was used for breaking down garbage, as well as a good use for sabotage.

Miami is a ract, a dromaeosaur pest that can squeeze herself into any opening like a rat. She is also a saboteur like her boyfriend, but instead of electicity-proof armor, she has MagRyve equipment, including an armored suit that can inject adrenaline serums for many purposes, and a robotic gauntlet that can be used for high-impact punches and sabotage. She's also a good strategist and tinker.

Her UIS Identity, Junklady Jindy, is a creature called a Vexitor, a compy-like pest dinosaur that is camouflaged in any environment through raggy clothing, but also carries two gauntlets, both controlling electricity and magnetism. These two can allow her to start up or shut off machines, as well as levitate metals, but when she binds them together, she can use any kind of electromagnetic energy. After some upgrades, they became partially biotic, meaning that they are part-organic machines, that both share a symbiosis with her. She is also a massively-impressive tinkerer, and she can built great and powerful weapons from any kind of garbage she can find, using it primarily for bounty hunting. She's also unfortunately a slob and enjoys being it. 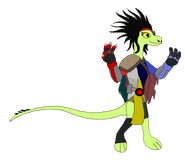 Junklady Jindy
Add a photo to this gallery
Retrieved from "https://spongebobandfriendsadventures.fandom.com/wiki/Miami?oldid=175742"
Community content is available under CC-BY-SA unless otherwise noted.