Mistmane is an Equestrian female unicorn pony and figure of Equestrian legend first mentioned in season six's The Crystalling - Part 2 as the subject of a spell called 'Mistmane's Material Amity'. She makes her first physical appearance in My Little Pony: Legends of Magic Issue #3, and she also appears in the season seven episode Campfire Tales. In both tales, she saves her home from her corrupted friend Sable Spirit by sacrificing her beauty to restore what she reaped on herself and her home, and when she helps settle a dispute between animals and the ponies who are building on their land in Canterlot, and became one of the Pillars of Equestria with Starswirl the Bearded and the planter of the Tree of Harmony, as she represents the precursor to the Element of Generosity, the Element of Beauty.

It's revealed that her hometown was overtaken by Mandrakes (legendary), as their leader, Magmatacus was looking to escape an underground lava prison of Mount Penance by triggering focal points, and one of them was located within her hometown, and hoped to use Sable Spirit to weaken their integrity and trigger the focal point there, but it was compromised thanks to Mistmane, and thus he sent the Mandrakes, as well as other mythical creatures, to reduce it back to where it was again, and Mistmane was unable to save it again before her disappearance. 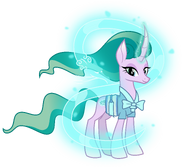 Past Appearance
Add a photo to this gallery
Retrieved from "https://spongebobandfriendsadventures.fandom.com/wiki/Mistmane?oldid=132641"
Community content is available under CC-BY-SA unless otherwise noted.