View source
watch 01:54
Obi-Wan Finale - The Loop
Do you like this video?
Play Sound

Othello is Iago's rarely seen brother. While Iago is a loud-mouthed shnook, Othello is a very upper-class sort-of-guy. Iago has Bule feather tips and Purple tail feathers, while Othello, lacks such, making him a fully red bird. Origrnally, he had a yellow neck-bib design, shown in his early concept art, (the bule spot and the purple back feathers is presumed a misdrew, along with the orange teeth, and will be removed in the final design for Othello.) Othello, ofittally by Scroopfan, will now have a socialite bib and an oritcle, (which is like, a Cyclops reading glasses) and will now have dark red feather tips so it won't disappear. Othello is based on Iago's original, deleted personality from the first Aladdin film. He currently serves Emperor Fang as his adviser and pet parrot. interestingly, Scroopfan may actselly consider Othello, cause it actselly got his attention.

He probally resents his brother possibly due to their childhood where Iago was maybe better than Othello and got all the attention while he hardly recieved any.

Othello freaking out when Emperor Fang gets angery. 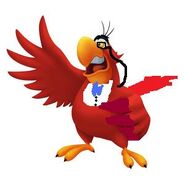 Othello telling everyone to prepare for the aprouching Emperor Fang.

Othello Angered by another villain's failure to please Emperor Fang. 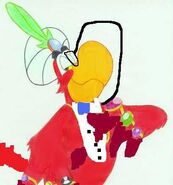 a much more Regel looking Othello. 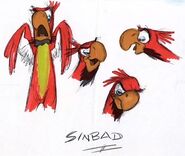 Concept art for Othello back when he was the prototype for Iago
Community content is available under CC-BY-SA unless otherwise noted.
Advertisement