Pinkie Pie is a bright pink Earth pony from Ponyville and one of the main characters of My Little Pony: Friendship is Magic. Her full name is Pinkamena Diane Pie, as said by her mother. She lives and works at Sugarcube Corner as a baker, assists Mr. and Ms. Cake at work, babysits their babies, holds parties for the various ponies of Ponyville, and goes on adventures with her friends. She is hyperactive, exuberant, enthusiastic, silly, talkative, jolly, and giggly. She writes and performs many songs, and she also has a toothless pet baby alligator named Gummy. She frequently serves as the comic relief of the show and performs impossible, logic-defying feats. She represents the element of Laughter.

When Rainbow Dash's sonic rainboom clears the clouds and paints a rainbow across the sky, the shock wave frizzles Pinkie Pie's hair giving it its distinctive curl, a visual gag that was conceived by Jim Miller. The sonic rainboom that she witnesses makes her smile, and she then decides to dedicate her life to making people happy and throwing parties. When she invites her family to their first party ever, her mother calls her Pinkamena Diane Pie. The family joins Pinkie, and they all shakily start to develop smiles, and eventually merrily participate in Pinkie's party.

Pinkie Pie is an ally to the Shell Lodge Squad just like the rest of her friends. She is the most favorite of the Lodge for her very funny antics. She is also hinted to make the entire Shell Lodge laugh by just saying "Doi!". She's capable of making anyone smile, or even laugh...almost (A Friend In Deed). She was even capable of getting the depression-feeding spirit Anima out of it's host by being funny. 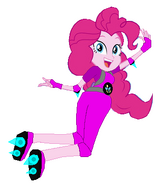 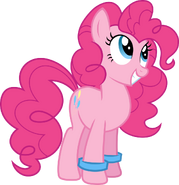