View source
watch 01:36
We're Getting Mutants in the MCU - The Loop
Do you like this video?
Play Sound

Asper was born in the original Mewman dimension of Mew. He grew into a carefree happy-go-lucky child who eventually fell in love with a little girl named Rubi. The two were friends at first until they grew into seeing each other like bonded souls. Unfortunately, during the time that the Xexaxez destroyed Mew, Rubi died falling into a void of nothingness. Distraught, Asper survived and evacuated to what is now known in modern times as Mewni, but at the time was refered to as M'onstrarus by the local Monster Populations that previously welcomed Mewmans in reckitneseing their victimhood by the Xzars. Heartbroken from his loss, Asper grew into a bitter jerk who learned to use magic without the aid of a magical device at age 10, as his first spell created an immortallar tree, a tree native to Mew with fruit that granted immortality. Though the tree could not survive in Mewni, Asper ate it's fruit, giving him immortality as he grew into a fierce knight for Mewni, swearing to make Mewni a new home for Mewmans at all costs, including the complete annihilation of monsters after he convinced Mewmans, who were already put off by some of the monsters less then complimentary traits of being radically different from Mewman Culture which was more sofisicated and refined where Monsters seemed to be more animalistic and near-tribal.

Dedicated to this oath, Asper lead on the front lines during the Great Monster Massacre of Mewnipendence Day, as he personally murdered the king and queen of monsters, King and Queen Varlet. Earning several high ranks for this achievement, Asper became dedicated to ensuring that monsters are wiped out. He would thus do anything to keep Mewmans from deviating from their goal of expanding and destroying monsters. He has since been manipulating all the queens of Mewni. Outside of this, other unethical acts include convincing St. Olga, the robotic founder of St. Olga's Reform School for Wayward Princesses, even being respondsable for Olga's existence as she was an outdated Nanny Bot from the Roboloid Dimention, a dimention of robots, that princesses with a carefree demeanor were a poison to royalty, and thus had St. Olga's become a place where princesses were brainwashed into 'perfect princesses' after an incident where a single wayward princess almost destroyed the universe. It's debatable if this is because he doesn't want to be reminded of the loss of Rubi or because of more practical reasons like the carefree nature being both a risk of extreme deviations or just because he came to be easily annoyed by such things, but there is an implication is a combination of all those reasons.

Out of all the queens he manipulated, his favorite was Queen Solaria, because she already had the goal of exterminating all monsters creating the Solarian Program to combat the most powerful of monsters, all by using her own wand's eternal flame as their primary weapon. He even upgraded his own power with this, and improved his magic spear. At one point he even fell in love with Solaria, but because she didn't have time to obtain a king, she stood him down in marriage. Additionally, it didn't helped Asper's bitterness about it when Solaria got with Alphonse the Worthy, espeially since Alphonse was abit more moderate about the campaign against monsters and believed only the truely dangerious ones should be removed and others are to be passifived, which unsurprisingly made him a stern rival to Asper's absolutist ways. He even felt betrayed by Solaria when she stepped down as queen and shut down the Solarian Program. After a heated argument over this, Asper sent Solaria to a nighttime mission where she was ambushed and killed by Seth of Septarsis, though despite this, he still felt terrible and made sure her dying wish of having her daughter Eclipsa marry Prince Shastacan was done, but he amorally justifived the action as "A Nessersary Evil for Mewmanity", believing that Solaria losing her ways (In his opinion) would've marked the beginning of trouble for Asper. But Eclipsa knew deep down that Asper was to be held responsible for her mother's death and just decides to run off with Globgor. Asper catches her in the act, but Eclipsa threatens to tell everyone about him masterminding Solaria's death through a scroll from the archives of the Bureaucracy of Magic if he revealed her disobedience. But Asper, too dedicated to royalty, breaks his promise and tells the Magic High Commission and Shastacan about her, Globgor, and their daughter Meteora. Eclipsa was thus crystallized before she could elope with Globgor with the intent of destroying Seth of Septarsis, both as an act of avenging Solaria and to rid the monster community of "Their own Asper Problem", Meteora is abducted and swapped out to St. Olga for a Pie Folk peasant girl named Festivia, whom Asper himself stole as payment for the Pie Folks' scams on the kingdom, and he destroyed the scroll evidence. But this enraged Globgor into eating Shastacan and laying barbaric siege on his family kingdom, the Spiderbite Kingdom, getting him crystallized in the process. Cause of having priorly ensured Shastacan that Globgor was rendered docile by Eclipsa, Asper is haunted by buyer's remorse on not figuring that Eclipsa's imprisonment would trigger Globgor's more primal instincts and regress him back to his previous ways, which inspired Asper to aim to be more perfect and more capable to predict what enemies would do next ever since, along with giving him a further intolerence to things not going as intended.

In a time prior to the time of Comet Butterfly, he accepted a deciple in the form of the sheltered and overly sensitive ten year old D'oughe Bagg, who dispite his meekly appearence and overtly smothered relationship of his overly loving parents, Asper was impressed by his great knowledge and magic cabailities, thus granted him a position as a deciple and his own spellbook and cane-wand accompanied by the large-mustached cousin of Glossaryck, Siamimaana, an even bigger goofball then Glossaryck cause he doesn't take anything seriously and just crack jokes and is obcessed with "The Bird is the word", to Asper's annoyence in not already being a fan of any of Glossaryck's kin. By the reign of Comet Butterfly, he started going low on his activity when he discovered that Seth, his equal rival, had unintentionally become a Xoldier, and Toffee became a Xexaxez Avatar. But to be sure of it, he allowed his meekly now slightly older D'oughe Bagg to make the mistake of convincing Comet to use a peace treaty to quell the war instead of absolute surrender of land cause Bagg feared the controversey would hurt young Moon as well as Comet. He ended up unsurprised, but still worried when Comet lost her life to Toffee, who unsurprisingly wasn't a fan of the treaty and killed her to deminstriaght how uncceptable the prospect of it was, and the crown was handed to her teenage daughter Moon. Bagg meanwhile, was reliefed of his capability of being Asper's deciple because of inadvertingly setting up Comet to die, even though as far as anyone knows, Comet planned the treaty all along, but Asper removed ties with Bagg anyway in an event Bagg's incompidence with it was found out and Asper is blamed by virtue of adopting Bagg as a deciple to begin with, leaving Bagg to wallow in regret of causing a queen to die for misguided reasons based on his own feelings for Moon, even when he wasn't of royal blood and that she clearly has a thing with Young River. Moon made a deal with the crystallized Eclipsa that in return for the spell to destroy Toffee, Eclipsa would be set free. This worried Asper more, as he feared that if Eclipsa was allowed to be set free, the risk of her coming back into power would allow her to expose his crimes, especially since she had access to the Bureaucracy of Magic's royal archives. So he convinced Moon that Eclipsa was better off crystallized, tried to find and destroy Toffee himself, and even saw her own daughter Star as someone not only too undeserving of the Royal Magic Wand or the crown and saw Marco as a bad influence on her, trying to get her sent to St. Olga's fruitlessly, but too recklessly sympathetic due to her carelessness, horrified when he learns that Star read Eclipsa's chapter and didn't think it was a big deal, fearing she'll try to undo everything he did. But even after so many attempts, he failed to keep Eclipsa from becoming queen again. Now that she had the power to do so, she confronted him with the entire history of his crimes and terminated his position. Angered, the two fight and the battle ends in a stalemate when Asper realizes that defeating her won't be a permanent victory and decides to leave the dimension to prepare for revenge. He would came to require flegdling loyalist he had recruited prior to that fateful fight and buildt a secret base of operations in the Endless Gold Rush Dimention and enslaved many wayword travelers, prospectors, pioneers and vagabonds, even some unlukcy nomadic Catcus People, to turn into slaves to build up an invadtion force for a return to Mewni in due time with a stronger army, even having still hold Glossaryck's sister against her will since she was attached to the spear's instruction manual that Asper kept, so he maintains his magic, aiming to ensure nothing stops him.

Asper is just as proficient in strategy as Toffee. His plans go close to victory and mostly do because he manages to use any advantage. His military experience and combat is vast as one of the longest-living Mewmans, as his longevity has been improved by the Solarian era of Mewni. He has a great learning intelligence and can take advantage of anything and plan strategies like instinct. His time in the Solarian era allowed him to advance further in these abilities.

As a Mewman with great longevity, he not only learned every spell in the Book of Spells, including those in Eclipsa's forbidden chapter, but he can use magic without an object of magic like a wand, learning this at an early age. His weapon of choice is a magic spear, which was originally created from a magical metal and then refashioned from a Solarian Sword to alternatively be a blade of magic capable of killing even the most deathly of monsters. With his strategic mind, he can use these spells advantageously, learn new and improved spells of his own, and he can adapt around curses.

Asper's monster body is of a monster called the Musculoirds, which are now rare and were prominent fighters in the Solarian era of Mewni capable of consuming magic, and had a war against Globgor's race. His body is similar to Globgor, but blue with spots and stripes, muscular reptilian tails, two giant ape arms and fists and two other normal arms, giant heads with monstrous teeth, devilish horns, lion manes, and vestigial wings. The monster in question he possessed was typically an elite guard of the leader of the monsters that retreated to The Endless Gold Rush Dimention, Sassafrass, that had the unfortunte duty of having to be the one to clean the imprisonment skull as part of a rotine keep the thing clean. Apawn pocession, Asper used the unlucky sot to beat up his own monster colledges and wrecked Sassafrass' home in New M'onsterarus, though thankfully Sassafrass himself was away from business, monsters were still nearly fatal injured as Asper in his begrudgent new form retreated from the Dimention, leaving residence shockful and fearful for the worse. 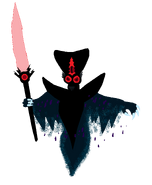 Asper as a Xoldier
Community content is available under CC-BY-SA unless otherwise noted.
Advertisement