Start a Wiki
Princess Celestia is a Pegasus unicorn and the co-ruler of Equestria with her younger sister Princess Luna, both of whom are responsible for raising the sun, moon, and stars. She is the mentor of Twilight Sparkle, whom she addresses as her faithful student. She is a recurring character in My Little Pony: Friendship is Magic.

It is revealed that Celestia and Luna found the Elements of Harmony at the Tree of Harmony and used them to defeat Discord, the spirit of chaos and disharmony, turning him into stone. Years later, as she and Luna maintained control of the sun and moon, Luna grew jealous after the night was shunned and unliked. Soon, Luna became Nightmare Moon, and Celestia used the Elements of Harmony to defeat her, concealing her in the moon.

1,000 years later, Celestia continued to rule Equestria, and knew that Nightmare Moon would return. She tells her protege, Twilight Sparkle, to leave Canterlot so she can learn about friendship, but Twilight is instead skeptical about Nightmare Moon's return. Eventually, Nightmare Moon does return, and seeks to command eternal night. However, Twilight and her new friends manage to defeat her using the Elements of Harmony. Celestia then offers Luna a chance to redeem herself, and she does. A season later, Discord returns, and Celestia places Twilight and her friends in charge of defeating him. However, Discord almost won, except with all the letters Twilight sent to her about friendship, she manages to save Twilight, and give her the courage to save her friends, and defeat Discord.

Princess Celestia is a friend to the Shell Lodge. According to the Fanfiction series, Princess Celestia was involved in a past situation involving Lord Shen and Lord Cobra revealed when the Shell Lodgers first arrive on Equestria via a space crash. In the MSM Shell Lodge Squad Interviews, it is revealed that Lord Shen has a crush on Princess Celestia. Also, in Scroopfan's story, Princess Celestia and Princess Luna were once turned into monstrous species called Serpicorns during Discord's rule, and when they discovered the Elements of Harmony, they turned back into alicorns and used the Elements to defeat Discord. It is also revealed that a century later, Princess Celestia and Luna's parents, King Nightus and Queen Heavenslight, were killed by a keyblade-wielding pirate named Captain Taiklar Blackheart, but this might not last for long. She also has several secret forms including her own version of Nightmare Moon known as Daybreaker, which is actually a much-less evil variation of her true Nightmare Moon form, called Solar Flare who, like Nightmare Moon, wishes for eternal day, as it was a result of an emotional turmoil of the early days of Luna's Banishment, yet since this discovery, fears that Nightmare Moon herself might have a whole new darker form than Nightmare Moon. She also has her own battle armor called the Celestial Armor, which hasn't been used since her battle against Baphomet, yet she still keeps it in case of an epic battle. 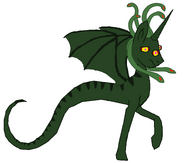 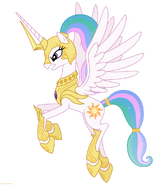 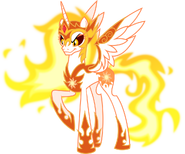 Celestia as Solar Flare (Image by JordiLa-Forge)
Add a photo to this gallery
Retrieved from "https://spongebobandfriendsadventures.fandom.com/wiki/Princess_Celestia?oldid=166351"
Community content is available under CC-BY-SA unless otherwise noted.