Start a Wiki
Queen Novo is an Equestrian seapony, and formerly hippogriff, currently living in the seas of Equestria and appears in the 2017 My Little Pony Movie. She is the ruler of Seaquestria, the underwater kingdom of seaponies located somewhere beneath her former home of Hippogrifia, the destroyed hometown of hippogrifs, located on top of Mount Aris. Novo had to evacuate her people after their original home fell to the The Storm King's forces. Although she insists she and her people are happy with their new, secluded lives, she can't deny how much she misses their old way of life. She and her subjects descended of griffin and pony heritage and formed their own country after full heritage of pony purity and became their own race, and later got destroyed by Storm King in his quest for world domination, and were rescued by the seaponies to where they formed a connection, as Novo became a seapony and their new leader. With the use of the Pearl of Transformation, Novo can shift different races into another at whim, doing so for her people, the hippogriffs, and ponies. She is the mother of Princess Skystar. She is voiced by Uzo Aduba (Bismuth, Crazy Eyes in Netflix series Orange Is the New Black, and Glinda the Good Witch in The Wiz! Live).

In The Stormy Road to Canterlot, Queen Novo, who is never referred to by name, appears as the queen of Hippogrifia, where she welcomes "Cherry Pie" and "Mort" (in reality Tempest Shadow and Grubber) with open hooves, at first unaware of their true intentions. That night, when Tempest attempts to steal their magic pearl, Novo catches them in the act and a huge fight commences between the hippogriffs and the Storm Creatures. Novo steals back the pearl and causes all of the residents of Hippogriffia to disappear.

Queen Novo appears on the Issue #1 convention exclusive cover and the trade paperback cover of the My Little Pony: The Movie Prequel. In My Little Pony: Friendship is Magic Issue #61, she attends the Convocation of Creatures as representative of the Seaponies/Hippogriffs.

Queen Novo is relaxing in her throne room when her daughter, Princess Skystar, returns saying she found something. Novo first believes it to be another shell, but when she sees it to be outsiders, she is furious that Skystar brought outsiders into their kingdom and summons her guards. Skystar tries to reason with her mother that she can vouch for the Mane Six, but when Skystar decides to tell the Mane Six the story of the Hippogriffs, Novo warns her not to tell them the story, but Skystar does anyway. The secret out, Novo reveals herself to be the Queen of the Hippogriffs that Twilight was seeking, and on Skystar's urging, reveals her Pearl of Transformation, using it to turn the Mane Six into seaponies themselves and Spike into a pufferfish.

However, when Twilight explains how they can use the Pearl to help save Equestria from the Storm King, Novo refuses, not wanting the Pearl to fall into Storm King's clutches, before offering her deepest condolences to Twilight over Equestria's fate. She soon leaves to go to a spa treatment, but soon emerges from it when she hears Pinkie Pie and Skystar singing and dancing, convincing the rest of the Hippogriffs-turned-seaponies to join in, with Novo soon getting in on the action herself. Moved by Pinkie bringing a smile to her face and convinced that the Mane Six were worth helping after all, Novo prepares to return the favor with giving them her Pearl after all, only to hear an alarm and realize that the Pearl was in danger.

Returning to the throne room, Novo discovers that Twilight had tried to take the Pearl in the meantime, only to be subdued by the Pearl's security system. Enraged that Twilight had deceived her and tried to take the Pearl behind her back, Novo outright refuses to aid the Mane Six now, and exiles them from her kingdom, using the Pearl to return them to their normal selves while snarling venomously at Twilight that she doesn't deserve to be one of them because of what she did.

However, Skystar chooses to still aid the Mane Six, using her mother's Pearl to return to her Hippogriff form, despite knowing that when Novo finds out, she'll be in so much trouble.

Some time later, learning of the Storm King's demise and Canterlot being saved, Novo transforms herself and her people back into Hippogriffs, arriving just in time to attend the Friendship Festival concert being performed by Songbird Serenade. As she reunites with Skystar, Novo makes it clear that Skystar is so grounded because of her actions.

Though brave in nature, Novo would much rather kick back and relax in her safe, underwater kingdom than take any direct action against the Storm King again. She is also helpful to anyone in need, as despite any initial reluctance, Novo eventually comes around to answer the Mane Six's call for help against the Storm King, and gives them seapony forms (Especially since, in SAFA lore, Tempest destroyed their merpony forms to prevent them from being a hindrance).

(Vector by infinitewarlock)
Add a photo to this gallery

Novo reprises her role as leader of the seaponies, who are one of the many aquatic pony breeds created by Princess Maricolous, the Alicorn God of the Sea. The seaponies started out as the first breed, and the merponies were Maricolous' method of combining Equestrian ponies with seaponies, and breeds like mermares (Comics), sea horses (Under The Sparkling Sea), and seaponies are close relatives to them, while the seaponies are the best and appearing more fish-like, and became the purest of aquatic breeds. Novo's people, the hippogriffs, are actually a more pure variant than the traditional hybrid, as they are actually the result of generations of interbreeding with griffins and Equestrian ponies turning them into their own race as they coexisted in one land which would become known as Hippogriffinstone, and Hippogrifia/Mount Aris would be one of their outside colonies, as this allowed them to inherit the incorruptible purity the Equestrian ponies had. Novo was the leader of Hippogrifia and had received a gift since being rescued from drowning by a seapony named Princess Swellsea in the form of a magic pearl that allowed contact with their ocean home of Seaquestria, and since she saved the Pearl from Tempest and Grubber and they responded with Plan B by having Storm King destroy Hippogrifia, resulting in the endangerment of Novo, Skystar, and her subjects. She contacts the seaponies for aid, and thus they helped evacuate them before they could be harmed, leaving Storm King's forces confused and desperate to find them. The hippogriffs were taken to Seaquestria with air support and turned into one of them, and ever since, Novo looked up to Swellsea's mother and Seaquestria's previous ruler, Queen Abysswish, and has grown to not only be next qualified as leader, but as the next guardian of the Pearl that holds Maricolous' soul inside it since her death during the Chaos Wars, as her power fuels many pearls that contain specific powers, one of which is the Pearl of Transformation, which she currently uses to transform ponies into seaponies and seaponies into hippogriffs and back again. It's also revealed that since before and after the rescue of Equantica, the two were well-known allies, as Queen Novo and her motherly mentor Abysswish aided in their recovery and bonded once again before Abysswish's departure, as Queen Novo would become an acquaintance to Queen Oceanious Typhoonica, Princess Skystar would form a friendship with her granddaughter, Harmony. It's also revealed that, following her banishing the Mane Six, she realizes the mistakes when Twilight calls her a coward before leaving as she spares them the risks of drowning by giving them temporary bubble helmets after changing them back to ponies, causing her subjects to hesitantly agree, and allow her to almost make up before Rainbow Dash insults her unnoticingly, prompting Skystar to knock her out and bring her back home before she could make a scene, and confesses she was bored of hiding before she is denied the chance to help and does it anyway, and after the movie, Celestia mends her tattered relationship with the ponies, and she gives them back their seapony forms, especially since Tempest Shadow destroyed their previous merpony forms. She's also revealed to have an aggressive older sister named Queen Corono who is a disapproving brute that believes hippogriffs shouldn't be cowards, or even be as passive as ponies, and wishes for them to be more proactive to where she hates and distrusts her younger sister for all the rash choices she makes. She also has the magical ability to temporarily enlighten herself to get out of a problem, an ability she sacrifices when fighting The Weather King because abusing it for all these years have left this ability unwanted, which gave the Weather King the side effect of second-guessing himself and becoming much more cowerdly then his reactions to Hippogriffs actselly fighting back in that it was from Novo after all, since she was constintely a second-guessing cowerd, replacing it with the ability to disable and mimic other magical hippogriff abilities which she uses to nullify and beat Weather King, as well as her family's hereditary ability of empathy, but initially to a limited degree for her while her daughter learned how to do it properly until beginning her training in this ability after learning that this was how the rest of her family healed from dark times. She was also revealed to have been manipulated by her seapony ex-boyfriend Tidecaller for fear of a barbaric hippogriff kingdom being born, and more so by a snake-like seapony named Backwater, who gave Novo an unlikable reputation to try and get Seaquestria's original purpose of guarding the Pearl of Maricolous back believing it was forgotten and endangered with the seapony-hippogriff alliance.

Novo's alternate Equestria Girls counterpart is also revealed in the series, as she and her daughter are both independent sailors on their own sailboat, as they used to live in a city called Hippogriff City, which was a resort city similar to Miami and human Canterlot, but has Hippogriffs instead of ponies, has tall skyscrapers, an elevated section called Harmonizing Heights and a large beach called the Weathering Shores, and has a massive coral reef exhibit for fish watching and snorkeling, and a large mountain nearby called Mount Aris. She was it's mayor and her sisters Ocean Flow as the deputy mayor and Corono as the bitter Chairwoman of the City Council. But thanks to the manipulative rigs of Agent Sacana, the two were forced to run but got trapped in an underwater reef by rocks and coral and almost drowned until discovering a magic pearl endowed with Equestrian magic from what was rumored to be mermaids, which were actually Equestrian seaponies that discovered interdimensional travel and donned mermaid forms. Close to death, the two used it to become mermaids and found their old sailboat which the pearl enchanted into one that can shift into a small cruise ship. The pearl also gave them the ability to 'hippogriff up' and breath and talk underwater even as humans. Though like her counterpart, she is afraid to face her past, and keeps her daughter out at sea sailing away from danger, with nowhere to go but underwater and their transforming sailboat. She wears both a one-piece swimsuit for underwater travel and a casual and colorful seapony/hippogriff-themed sailor suit for when they are on land. 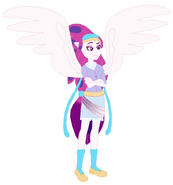