Rarity is a unicorn pony who resides in Ponyville and is one of the main characters of My Little Pony: Friendship is Magic. She is the older sister of Sweetiebelle, a member of the Cutie Mark Crusaders. Rarity works as both a fashion designer and as a seamstress at her own shop, the Carousel Botique. She has a white Persian cat named Opalescence. Her personality traits consist of elegance and generosity, for which she represents the element of Generosity. Twilight's asisstant Spike is on occasions hinted to have a crush on her

In Sweet and Elite, Rarity states she was born in Ponyville. During The Cutie Mark Chronicles, Rarity retells her story of her life as a filly to the Cutie Mark Crusaders. The flashback starts on an outdoor theater near the schoolhouse, where some fillies were practicing for a school play, dressed as various foods. The teacher complimented Rarity on her costume design, but the perfectionist Rarity insisted that the dresses didn't meet her expectations and tried to create new ones to no avail. Almost immediately, a light ignites in her horn, and it shoves Rarity leftward until it stumbles into a very large, geode-like boulder. Rarity, having thought her horn would help her find "[her] destiny", is deeply unsatisfied. Then, Rainbow Dash's sonic rainboom occurs, causing the boulder to split in two, revealing the boulder to be filled with gemstones. Rarity decides to add these to the existing costumes to snaz them up, earning both the admiration of the crowd, and her cutie mark.

Rarity is responsible for the decor during the Summer Sun Celebration. When she sees what Rainbow Dash accidentally did to Twilight's hair she is compelled to give the latter a makeover. She also develops a fascination with Twilight when she hears she is from Canterlot. Twilight flees the Carousel Botique (Rarity's shop) in fear of the thought of Rarity dying her coat a new color.

Rarity daydreams in The Ticket Master about meeting Princess Celestia's dashing "nephew" at the Grand Galloping Gala, with her fantasy culminating in marriage and induction into royalty. Upon attending the Gala in The Best Night Ever, she spots a stallion, depicted with the same character design as the one in her fantasy, who is identified as Prince Blueblood. Although handsome, and initially charming, Blueblood turns out to be conceited, rude, and narrow-minded. He expects Rarity to care for him while doing nothing in return. Rarity tries to be patient with the prince's manner, but his selfish ways finally exhaust her patience when Blueblood uses her as a shield from an incoming cake. She then angrily declares him to be a "royal pain" and splatters frosting all over him.

Rarity is an ally to the Shell Lodgers, as is her friends. She likes adventure, but she just doesn't like getting dirty or messed up. 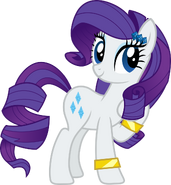 Rarity (Humanized) (Original by BerryPunchrules)
Add a photo to this gallery
Retrieved from "https://spongebobandfriendsadventures.fandom.com/wiki/Rarity?oldid=143044"
Community content is available under CC-BY-SA unless otherwise noted.