Start a Wiki
The Ruler of the Forgotten, RF for short, is an entity which is a personification of forgotten dreams and thrives through forgotten cartoon characters. Existing since the dawn of creation, this creature has been taking forgotten characters, stealing their Hearts, which are the source of their fame, and making them slaves. He gets stronger and gains a base form the more characters are forgotten, and when he is weak, he has no base form and has weakened powers. He has the ability to manipulate the UUniverses' fabric through paint, which synthesizes anything erased or non-existent, and thinner, which erases or kills anything it touches. He has similar abilities to the Shadow Blot, though he also has the ability to control his own forgotten characters as slaves, as well as their Hearts, as well as erase or revive them with paint or thinner. Though he is extremely unpleasant to those he seeks out, he's not necessarily 'evil' in a traditional sense. He's actually an extremely dark and amoral being that used to have a purpose in the UUniverses and deal away with the forgotten, but thanks to Originos, and more or less the Internet, even unsuccessful and obscure movies avoid being truly forgotten and the RF has been rendered unceremoniously retired, making him more akin to a desperate animal needing to survive or a retired warrior longing to be useful again than a truly-malevolent force. But still, the fact that he would refuse to go back to his position as unneeded again would likely drive him to villain-like extremes that still makes him a threat overall.

The Ruler has several abilities based upon two holy substances which can bend the physical fabric of the UUniverses as a whole:

The Ruler can use these abilities to strike fear into it's enemies, showing them not to cross it that easily. It never speaks, but it can roar when strong enough, can shapeshift, fly, turn into a paint or thinner clouds, can camouflage himself in the environment, and he can corrupt with a single touch. When he is weak, he has no base form, but when he gets stronger when enough characters are forgotten, he grows a base form of a black figure which glows blue when using paint, and green when using thinner, and if strong enough, could become immense and unstoppable, not just from the sheer size, but too many heroes will be too weak to fight him as his slaves. 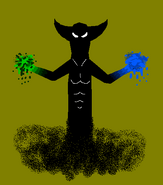 Form 4
Add a photo to this gallery
Retrieved from "https://spongebobandfriendsadventures.fandom.com/wiki/Ruler_of_the_Forgotten?oldid=135309"
Community content is available under CC-BY-SA unless otherwise noted.