Start a Wiki
Senator Glara Tricorn is a UUniversal Senator dragon from the Dragon Realms. She is both a senator representive to the Dragon Realms and the prime senator of the UUniverses and has been a pretty influencing superior. Though with power comes responsibility, a philosophy which is lost to Tricorn since her mind was poisoned by an incident that turned her into a cyborg. After the events of Kevin Longbill's corrupted influence on Equestria, she attempted to eat an 'abandoned' egg of a Red Devil Spitting Cobra, which melted away part of her body as she was resurrected by Cybercon. Parts of her brain and body had to be replaced due to the injuries, and her new appearance was covered by a coat of artificial skin, afraid of her beauty being marred. She is highly intelligent, yet very airheaded and extremely arrogant due to the machinery on her head. It has been revealed that Tricorn has a prior history and service to the military and knew several old friends including Warden Ayres and Cyclona, having served in the Great Grox War in the Dragon Realms before she was a senator and was also generally good-natured before her accident. She since grew a bad influence thanks to a prototype cybernetic brain and a problem it has amply named Glitch-Corn. She developed a hatred for monsters, as well as a hatred for everything traditionally a threat to a functional society such as mutants and others. She became a strict and cold senator, and her attitude would lead her to have a crumble of reputation, several momentary suspensions of power, and later down the road, further loss of her limbs. She has, however, earned the sympathy and even secret affections of Jamica Boa, a cousin of Lola Boa, who struggles keeping Tricorn as calm and collective as possible. 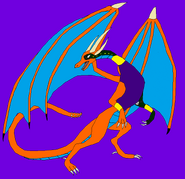 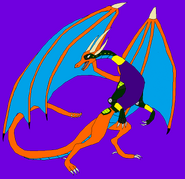 Second Implants (After Blood is Thicker than Water, and Appearently Gets You in Trouble) 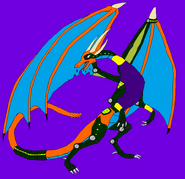 Third Implants (From A Tri of Justice)
Add a photo to this gallery
Retrieved from "https://spongebobandfriendsadventures.fandom.com/wiki/Senator_Tricorn?oldid=86977"
Community content is available under CC-BY-SA unless otherwise noted.