Start a Wiki
Shadow Fagin is the Heartless clone of Fagin that was accidently and indirectly created by Fagin while controling and turning Denahi into a Villain League warrior. Cause Fagin was unable to appear personally, due to the spirits preventing him so, It managed to merge the both of them into a fusion warrior similar in construct to Xehanort and the Guardian Heartless with denahi as Xehanort and Shadow Fagin as Guardian. because of being born from both Denahi's rage, the darkness in his heart, and without Fagin to regularate his corruption, Shadow Fagin was born the minute Denahi entered the mountain. Shadow Fagin admited that he is close to become even greater then his present state as soon as Denahi murders Kenai, and that he'll rule Malvenivaly on the disney ice age world. unlike the real Fagin, Shadow Fagin seems more over-comident, ego-inflicted, easily surprased, shown in the gallery when Kairi appeared with a keyblade, easy to hit, very light in terms of waight, and not too very smart, but presumed dangerious and somewhat cunning nonetheless provaded if things are in his favor. He was shown to be very satistic and cruel, having no remorse for his foes, and to top up the jerk metor of this guy, uses the past of Kairi and Cynder to try and sadden them, thanks to being blessed with the real Fagin's photograpic memory, (and quite possably has exsact born in knowlege of all the shell lougers' pasts and histories), presuming that he'll feed on the saddness like the real Fagin, and, of course, Scroopfan directly rips off the Jabberwocky's Hannibal Lecture to Alice from American McGees Alice when Shadow Fagin tries feeding off of Kairi for no apparent reason other then presumingly to prevent Kairi from being a problem, "We were asleep" and all, and again on Cynder, simulating the cruel cathumandniod hermit. He prosesses remarkable abilities not normal for heartlesses (at least not most organic (AKA Kingdom hearts originals) Heartlesses), He is cearly an un-detailed Basic-looking Shadow heartless (or called a prue-blood heartless) with only red eyes and an un-determin form, one to looking like a vulturistic condor to a shorten crow-like vulture, yet he prosesses the power to trow fireballs, assuming he's fire-based, also with the power to tern his wings into sharped end slasher swords, though not the as fatal or most damage causing as the fireball, it's not something you'll want to take too much off, a direct hit to a vital organ or the eye and it's game over one way or another. he finally lost control over Denahi to Kairi's princess of heart powers, causing him to vow revenge, but ends up not being a promise he'll be able to live up to, as Spyro finishes him off with the super purple dragon attack, and without Denahi's lifeforce energy to make him invuliable, the purple powers give out great and fatal damage to Shadow Fagin, caused Shadow Fagin to turn to a huge blob-like engery beast and explode, causing a huge explosion! there are some unclear rumors that Fagin might attempt to bring back Shadow Fagin cause he was one of those very few villains that were almost sussessful of almost destroying the louge. Of course, before his demise, Shadow Fagin also ripped off pre-reformation Shen just because Scroopfan wanted to give at least some form of predevelopment nod of him thinking that Shen was just going to be a generic sequel villain, and that everything Shadow Fagin did, Shen was going to do instead. Besides, those fireballs of Shadow Fagin are actually Shen's cannonballs to keep up with the increasing Brother Bear into Kung Fu Panda 2 parallels.

Shadow Fagin getting his butt burned 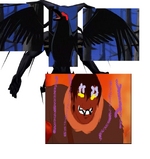 another fanart.
Add a photo to this gallery
Retrieved from "https://spongebobandfriendsadventures.fandom.com/wiki/Shadow_Fagin?oldid=147670"
Community content is available under CC-BY-SA unless otherwise noted.