Start a Wiki
SpongeBob and Friends in A Goofy Movie is the 2nd moisode in the 2nd Season of the SpongeBob and Friends Adventures series. In this new adventure, the Shell Louge Squad gets lost in a world mostly ruled by dog-like people while on the journey for Merlin. There, they will meet a comical clone of Goofy (Kingdom Hearts version), and will have to partake in the craziest vacation of their lives after unintentionally getting his son, Max in trouble for putting on an awesome performance. Then they realize that they are really in part of trying to patch up the bond between a father and his son. Well, at least this time, their vacation will not be ruined by the Villain Leage like it was on SpongeBob and Friends meet Lilo and Stitch.

Our plot begins with Max having a nightmare about turning into his dad in a field while out with Roxanne, all the while Lord Cobra in a dream-like form laughs like the Headless Horseman at Max's misfortune. Max quickly wakes up and then moves on with his plan to finally impress Roxanne. The Shell Lodge Squad crash in the middle of his school's field after getting lost of the Map to Merlin's guidance. They go inside, introducing themselves to Max and PJ, who then come across another friend, Bobby Zimuruski. They plan to impress Roxanne by starting a concert, and the Lodge seems a little skeptical about this, but decide to help out anyway. They hijack the auditorium stage in the middle of Principal Mazur's speech, creating a small concert where Max performs while costumed as his well-praised pop singer, Powerline. The performance succeeds in making Max a school celebrity and impressing his love interest Roxanne. However, Max is sent to Mazur's office, and the Lodge is forced by Mazur to keep an eye on them, or he would file a complaint to the city. Worried that this might cause them to lose their edge, they agree. On the way, Roxanne speaks with Max and agrees to go with him to a party where Powerline's concert will be aired live. But Mazur calls Goofy on the phone, and forewarns him that Max's actions may result in facing capital punishment.

Goofy desperately decides to take Max on a fishing trip to Lake Destiny, Idaho, following a map route he and his father took years ago. Max and the Lodge arrive to meet Goofy, and are surprised that he is spoiling his son a bit, not to mention that he is a clone of the KH Goofy. Max tries to tell his father about the party he and Roxanne are planning to go to, but Goofy refuses to cooperate and shoves him into his 1978 AMC Pacer Wagon. The Lodge, on the way, decides that this could give them a chance to relax and find some clues on how to find Merlin, so they agree to join them on their van. Max stops by Roxanne's house to call off their date, but when Roxanne says she will just have to go with someone else, Max instead fabricates a story about his father knowing Powerline, and that he will be on stage at the concert with Powerline. The Lodge is surprised that he lied to his girlfriend, but Max begs them to keep it between them and himself. So they set out on the road.

Goofy plans his own trip against Max's wishes. After a song, Goofy takes Max to an opossum-based theme park where he and his father went to, the Lodge is convinced that Goofy is downright spoiling his son FAR too much. Regardless, they go in and see the show. The music isn't what really entertains the Lodge, but what does is the fact that the show is malfunctioning. After Max is unintentionally humiliated during a picture-taking, he hurts Goofy's feelings and the group heads out. While camping, Pete and PJ join them, and the Lodge is, of course, shocked at how much luxury the Petes have, and they tell PJ about Max's lie, and after a while, they fail to convince Max to change his mind. Following Pete's advice to keep Max under control, Goofy takes his son fishing. The Lodge watches as Goofy performs 'The Perfect Cast' fishing technique, and are shocked that they lured Bigfoot to their camp. Pete and PJ flee, leaving Goofy, Max, and the Lodge to handle Bigfoot. Goofy, Max, Sandy, and SpongeBob spend the night safe in the car with Bigfoot while the rest of the Lodge remains out of Bigfoot's sight, and intend to find the keys that Bigfoot threw away so they can escape. At night, Goofy and Max make alphabet soup while SpongeBob and Sandy help theirselves to some Krabby Patties they kept on their trip. Later on, Goofy and Bigfoot's snoring wakes up SpongeBob and Sandy, and they both see that Max is feeling nervous for his lie until he decides to alter the map route to Los Angeles where the concert is to take place. Before SpongeBob can tell Sandy something personal, the other Lodgers distract Bigfoot with music, and they all escape as quick as a flash.

While having breakfast at a diner, Goofy decides to make Max the navigator of the trip, and the Lodge is surprised by this. The two go to several locations that satisfy both of them, and the Lodge have a little fun of their own along the way. They stop by a motel where they meet Pete and PJ again. Icky and Pete order some pizza and PJ, Max, and SpongeBob talk about Max's move in changing the map route. But Pete and the other Lodgers overhear it, and intend to tell Goofy. At the hot tub where Goofy, Icky, Sandy, Iago, and several other Lodgers hang out, Pete arrives and tells Goofy that Max has duped him in traveling to Los Angeles. The Lodgers accompany Goofy in discovering the whole thing on the map, and once Goofy arrives, the Lodgers have a conversation to SpongeBob and Sandy about not telling them about it sooner, and an argument ensues since SpongeBob promptly promised that they would keep Max's change a secret and that keeping secrets was against Shell Lodge rules, and this damages Sandy and SpongeBob's friendship.

The next day, the Lodgers still sour at SpongeBob for keeping the secret, especially Sandy, Goofy and Max come to a junction, one leading to Idaho, the other to California. Max chooses the route to California, causing the Lodge to get angry at Max, and Goofy to stop the car and storm off in anger. The Lodgers refuse to help out Max, but SpongeBob decides that he should do it. But during all of this, the Pacer drives off on its own, as well as the Van. Max, Goofy, and the Lodge chase after the car, and SpongeBob intends to risk his life to save Max, Goofy, and the Lodgers from getting crushed by boulders, and this act causes the vehicles to end up at a river. Feeling grief for treating SpongeBob badly, Sandy rescues him from getting crushed by the vehicles, and the Lodge apologizes for their ill will with him. Also, after a brief falling out, Goofy and Max reconcile, and they and the Lodge sing a song together. Realizing that Max had promised to Roxanne to go to the Powerline concert, Goofy decides to take him to Los Angeles, surprising the Lodgers. However, the two vehicles reach a waterfall, and the Lodgers are able to swim their way into the partially flooded and damaged Van, and get it to take off. But their van is far too damaged to help Goofy and Max, but Max saves Goofy using the Perfect Cast fishing technique. The Van recovers the damaged Pacer, and help Goofy and Max into the Van and take off towards LA.

The gang reach Los Angeles, and while Max and Goofy end up accidentally on stage and dance with Powerline while being watched by Pete, PJ, and Roxanne on separate televisions, the Lodgers are forced to elude security, and hide themselves into the audience to see Goofy and Max's performances with Powerline. The next day, Max and Goofy return to Roxanne's house in their damaged car with the Lodgers. Max tells the truth to Roxanne but she accepts it and admits she always had feelings for him ever since he first said "Ahyuck." Goofy is blown upward by his exploding car, but safely falls through the porch roof of Roxanne's house, and is introduced to her by Max. The Lodgers are happy to have had a great trip with new friends, and they decide to say their goodbyes to the Goofs, and manage to discover a clue to Merlin's location originating from Paris, France in another world. They take their recently-repaired van, and take off.

MSM asked Scroopfan to have the Bigfoot scene on the moisode as his own. He agreed to, as long as he had some pictures to go along with it. And MSM got to work. The scene is where Goofy, Max, SpongeBob, and Sandy are trapped in the car, while the others are hiding in the bushes. When Patrick sees Bigfoot throwing the carkeys away, He tells SpongeBob that he and the other Shell Lougers will do whatever it takes to get them back so they can make a run for it. That night, After Goofy and Max talk about Hi Dad Soup, SpongeBob and Sandy are sitting in the back eating Krabby Patties that SpongeBob packed, when it all leads to them both being in a romantic like moment. That night, when Goofy and Bigfoot's snoring wakes up Max, SpongeBob and Sandy, Max tries to write a note to Roxanne, and stumbles upon the map. Max quickly tries to change the route to Lake Destiny, to LA. But when the pencil snaps loudly, Goofy is awoken, Max is quick enough to change the route successfully, and put it up quickly. When Goofy falls asleep again, SpongeBob and Sandy sigh in relief. SpongeBob then thinks that if this is the end, then that he should reveal to Sandy his crush on her, until they are interrupted when Patrick russels the bushes, and lures Bigfoot (Who was awoken by Goofy's loud voice when he wakes). When Bigfoot sees, Patrick quickly puts headphones on him, and use it's music to distract him long enough for the misfits to retreat. At the beginning, when the lougers meet Bigfoot, Cynder tries to stop him, but Bigfoot roars at her, and his bad breath knocks her to the ground.

before Scroopfan resectfully agreed to do thing MSM's way, Scroopfan had something else in mind that puts Big Foot in a more redeeming light. It starts by the next day with Cynder aprouchs BigFoot, with him roaring, but Cynder scorns Bigfoot, much to his surpase, Cynder tells the creature to stop harrasing her friends, with Big foot agrees greatly, and defelupt a friendship-like resect for, as Cynder returns the favor, tells him sorry for yelling, and tells him to behave. After hearing about this, MSM contacted Scroopfan to apologize. And Scroopfan said it was okay, and that he could make some notes for the Alternate ending. Then MSM had part of Scroopfan's version to his. 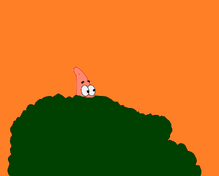 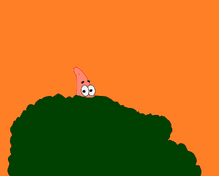 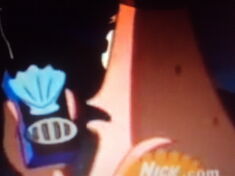 Patrick talks to SpongeBob in Walkie-talkie 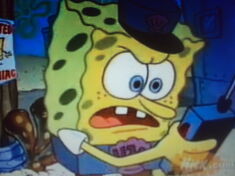 SpongeBob talking to Patrick in Walkie-talkie 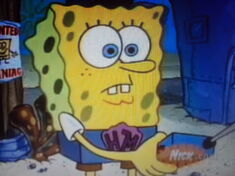 SpongeBob talking to Patrick on Walkie-talkie #2 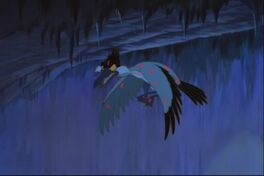 Icky after looking for keys in the Poison Ivy cove 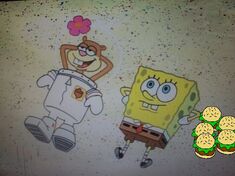 "Who'd think we'd wind up in the middle of nowhere with Bigfoot?" 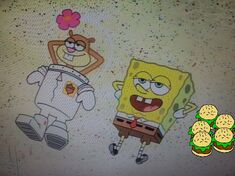 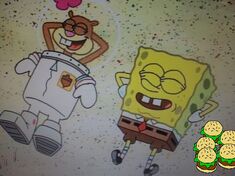 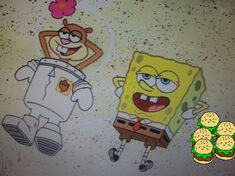 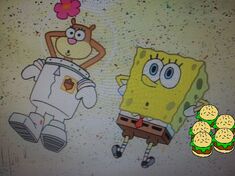 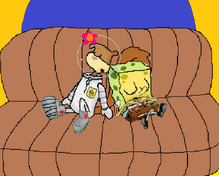 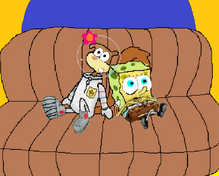 SpongeBob and Sandy awoken by Goofy and Bigfoot 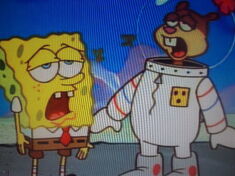 After Max changes the map 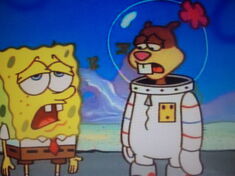 After Max changes the map #2 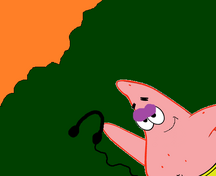 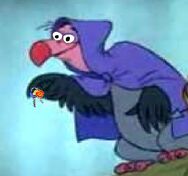 Nutzy with Goofy's car keys
Add a photo to this gallery
G
Retrieved from "https://spongebobandfriendsadventures.fandom.com/wiki/SpongeBob_and_Friends_in_A_Goofy_Movie?oldid=171388"
Community content is available under CC-BY-SA unless otherwise noted.