Start a Wiki
Star Wars Episode 4: Shell Lodge Style is the 4th Episode in the 2nd Season of the SpongeBob and Friends Adventures Chronicles series. In it, The Cutie Mark Crusaders are bored when they once again fail to get their cutie marks. So, to top it off, Scootaloo tells the story of Star Wars with the Shell Lodgers and Ponies as the cast. Also, while this film primarily contains jokes from the Family Guy version called Blue Harvest, this movisode will add story elements/plot points that were omitted from Blue Harvest for time.

Other characters are various camios of other lougers, or sometimes villains.

A long time ago, but somehow in the future...

"It is a period of civil war. Rebel spaceships, striking from a hidden base, have won their first victory against the evil Galactic Empire. There will be lots of crazy stuff happening in this parody like the Family Guy parody. Darth Vader will be a female, The main heroes will mostly consist of females, and the stormtroopers are just Shocktroopers. It will actually be explained in later episodes why Darth Vader is a female in this parody, and those who watch this and are female, PLEEEAAAASSE don't think of this as a girly episode just because females are the dominant gender in this episode. It will still have plently of guys! Trust me on this!

Elsewhere in the Tantive IV

The hallway from before.

miles later in the sand dunes.

Death Star, the Most Powerful Weapon in the Galaxy

Inside the walking krusty crab thing.

Later that day, and Tatooine's two suns are setting in the distance

Later, after going back for Shen, R2 and 3PO

(He suddenly sings this, as back-up dancers dressed as storm troopers appeared)

Chapter 6- Rescue and Escape from The Death Star

Inside the Death Star

Chapter 8- The Force Is Strong With This One!

In the death star.

Inside the Death Star 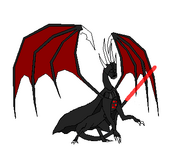 Darth Cynder
Add a photo to this gallery
Retrieved from "https://spongebobandfriendsadventures.fandom.com/wiki/Star_Wars_Episode_4:_Shell_Lodge_Style?oldid=154596"
Community content is available under CC-BY-SA unless otherwise noted.