Start a Wiki
Starlight Glimmer is an Equestrian unicorn and the main antagonist of the Season 5 premiere of My Little Pony: Friendship is Magic. She was a troubled and tragic pony who, following the loss of her best friend after him earning his cutie mark, had driven her into wanting to make ponies have the same cutie mark, and created a utopia-like community where all ponies have equal-sign cutie marks to represent 'being equal'. Luckily, the Mane Six stopped her and rescued the town, though Starlight escaped. She appeared in hidden areas in later episodes, and made her next major appearance in the Season 5 finale where she used a time-travel spell to prevent the Sonic Rainboom that made the Mane Six the heroes they were, regardless of the consequences. She eventually reforms and becomes friends with the Mane Six, and makes up for everything she ever done, including apologizing to the town she enslaved.

Depiction in the series

Starlight Glimmer first appears as the founder and leader of a mysterious village in which every resident has given up his or her cutie mark.

As the leader of this village, Starlight has the philosophy that "true friendship" comes from being equal—no more or less talented than another—and that having special talents of any kind only leads to disharmony. To this end, Starlight uses a magical artifact called the Staff of Sameness to remove her followers' cutie marks and replace them with equal signs.

When Twilight Sparkle and her friends arrive at the village, Starlight Glimmer sees this as an opportunity to spread her message of equality to all of Equestria. She leads the Mane Six to a vault of cutie marks outside the village, where she takes their cutie marks from them with the Staff of Sameness and tries to convert them over to her way of thinking. Fluttershy, the only one among Twilight's friends who appears to convert, spies on Starlight and discovers that her own equal sign cutie mark is actually makeup.

Using a bucket of water, Fluttershy and her friends expose Starlight's secret to her followers. It is also revealed that the Staff of Sameness's ability to remove cutie marks is Starlight's own magic and that the staff is an ordinary piece of wood. She attempts to leave with the Mane Six's cutie marks but is thwarted by her former followers. Having lost her followers' faith, Starlight retreats from the village and escapes to parts unknown.

In Amending Fences, Starlight hides her face behind a menu in the café scene. In What About Discord, she was seen again hiding behind a bush watching the group through binoculars.

In The Cutie Re-Mark - Part 1, she briefly appears during Twilight Sparkle's Cutie Mark Magic lecture. When Twilight and Spike have a brief conversation about her on their way back to Twilight's castle, Starlight greets them in the map room. Using a time spell by Star Swirl the Bearded, she teleports herself, back in time to when filly Rainbow Dash was racing with three bullies who pick on Fluttershy. There, she prevents Rainbow Dash from performing the sonic rainboom, which in turn changes the future of Equestria. Twilight and Spike continually teleport back in time, but each time, Starlight stops them.

In The Cutie Re-Mark - Part 2, Starlight and Twilight continue to clash in order to stop the sonic rainboom from happening, until Twilight decides to teleport herself, Starlight, and Spike to one of the ruined futures of Equestria, to show Starlight the error of her ways. But Starlight is in denial, refusing to accept the truth. As Twilight says she cannot understand why Starlight acts this way, Starlight decides to show the two her past, when she was a filly, where her best friend, Sunburst, earned his cutie mark and left for Canterlot, leaving a young Starlight without a friend, and with a fear of losing other friends. After bargaining with Twilight, Starlight decides to allow the rainboom to occur, restoring the present day. The episode ends with Starlight becoming a new friend to the Mane Six and citizens of Ponyville.

When initially introduced, Starlight Glimmer is openly friendly and welcoming, both toward the Mane Six and her followers. She is also somewhat of a disciplinarian, issuing punishment to those who do not conform to her philosophies. However, she later adopts a more callous and ill-tempered persona, desperate to keep up appearances and dismissing any concept of friendship that isn't the same as her own.

Starlight Glimmer is very skilled in using magic and mentions that she has studied a spell for years. She wields an ordinary wooden staff called the Staff of Sameness while casting a spell in a ceremony known by her followers as "cutie unmarking," pretending this to be the staff's power instead of her own. She also uses telekinesis at long range, projects magical barriers, creates distracting lights, and shoots powerful magic blasts.

Starlight has made a brief return in the two-parter Starlight Star-Fight, this time with help, and more details into the reasons behind her motivations behind her actions, and a much more unpleasent past. The episode briefly fell victim to canon conflict with the Season 5 finale of MLP where Starlight returned and her canon past was explained. Turns out, following the loss of her friend Sunburst and her developed fear of losing friends, she signed up to be a part of the School for Gifted Unicorns upon discovering her sister, who was none other than Sunset Shimmer, both being raised by different divorced parents, and used it to get to Canterlot so she could search for Sunburst. However, she never found him and gave up hope. Due to her fear of losing friends, she ended up being socially incompatible and she soon got reduced to blaming cutie marks for it. She eventually discovered the works of a hippogriff communistic tyrant named Beak-Buck and his cutie mark vault, and wanted to use it for her own means. When Sunset refused to join her, believing she lost a sister, she ended up angry and laid waste to Canterlot, destroying homes and injuring ponies, even uncontrolingly murdered one who was a guard. She was eventually caught and awaited trail until she was rescued by a chaotic rogue creation of the Draconequus named Fem Fatala, who gave Starlight the village and the location of Beak-Buck's vault, and in return, she would serve as one of Fem's many scammed sex slaves if she lost it and failed in her task to being cutie mark equality to Equestria. It wouldn't be long before she finally failed and, after convincing Fem Fatala for one last chance, would make a final chance and be tricked. 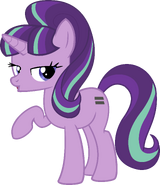 Retrieved from "https://spongebobandfriendsadventures.fandom.com/wiki/Starlight_Glimmer?oldid=134912"
Community content is available under CC-BY-SA unless otherwise noted.