Start a Wiki
Sunset Shimmer is a unicorn from Equestria who serves as the main antagonist of My Little Pony FiM: Equestria Girls. In the movie, she is portrayed as an old student of Princess Celestia who quit because of not getting what she wanted, and discovered a magic mirror which took her to a human world where she planned to take over Equestria. She steals Twilight's crown and takes it to the human world where it is used to be a crown for a Fall Formal of a High School, which Twilight tries to win. Sunset tries everything she can do to stop her, but each one gets foiled. She is luckily defeated, and Twilight decides that her friends' human counterparts befriend her and show her the magic of friendship.

Role in the MLP Series

Sunset Shimmer appears as the main antagonist in My Little Pony Equestria Girls. She steals Twilight Sparkle's element of magic crown, and during a tussle with Twilight, the crown is thrown into a mirror which acts as a portal to another world. Sunset then follows the crown shortly after.

Princess Celestia reveals that Sunset was a former student of hers who began her studies not long before Twilight did. However, when she didn't get what she desired as quickly as she'd liked, she turned cruel and dishonest, eventually abandoning her studies to pursue her own path. In this other world, Sunset has been living as a human and student of Canterlot High for some time. She discovers that Fluttershy had found the crown and turned it over to Principal Celestia, much to Sunset's annoyance.

Upon learning that Twilight will be competing against her for the title of Princess of the Fall Formal, Sunset employs various ways to hinder and humiliate Twilight, such as having Snips and Snails record embarrassing videos of her struggling to get used to the human world and releasing the videos online, and doctoring photos to frame Twilight for ruining the dance decorations. But Twilight's friends help to counter these ploys by improving Twilight's reputation and Flash Sentry, Sunset's ex-boyfriend, helps prove Twilight's innocence.

At the Fall Formal, when Twilight is named Princess and given the crown, Sunset has Snips and Snails kidnap Spike and threatens to destroy the portal to Equestria unless Twilight gives her the crown. Twilight refuses to give the crown up, stating that her being stuck in the human world would be worth stopping Sunset. As Twilight's friends commend her bravery and sacrifice, Sunset snaps and attacks her. Despite Twilight and her friends' efforts, Sunset succeeds in getting the crown and puts it on, transforming into a demonic creature. With her newfound powers, Sunset transforms Snips and Snails into similar-looking minions and brainwashes the other students at the school. She reveals that she never intended to destroy the portal and plans to invade and conquer Equestria with her army of teenagers.

Twilight is able to evoke the powers of the Elements of Harmony when her friends move to protect her from Sunset Shimmer's attack. Temporarily given pony-like characteristics, they use the magic of friendship to defeat Sunset Shimmer and return Snips, Snails, and the rest of the students to normal.

As everyone recovers, a beaten and repentant Sunset is reduced to tears and apologizes to everyone she's hurt. She admits to not knowing anything about friendship, to which Twilight says her friends can teach her. Sunset, Snips, and Snails are later tasked by Vice Principal Luna with rebuilding the part of school they had destroyed during their attack.

Sunset Shimmer appears again in the second movie, being reformed from her villainous ways in the first film. With the exception of the Rainbooms, the rest of Canterlot High bears resentment toward her and she even resents herself for the actions she'd taken as what she refers to as a "raging she-demon". She even admits to herself and her friends that she only dated Flash Sentry to make herself more popular.

When Sunset gives The Dazzlings a tour of the school, she gets a bad vibe from them when Adagio Dazzle gets defensive about her pendant. Her suspicions are later confirmed when the Dazzlings mesmerize the students and faculty with their singing. Using a magical book with her cutie mark on the cover, Sunset sends an SOS to Twilight Sparkle in Equestria. During Twilight's role as the Rainbooms' lead singer, Sunset acts in a supportive role and keeps an eye on the competition, especially the Dazzlings during the Battle of the Bands. At one point, Sunset confronts the Dazzlings, who try to manipulate her insecurities by pointing out that the Rainbooms were reluctant to allow Sunset into the band.

When the Rainbooms lash out at each other during the final round of the Battle of the Bands, Sunset realizes the Dazzlings' true intentions and is able to stop the arguing. She even accepts partial blame due to her lack of knowledge on friendship.

When the Dazzlings overpower the Rainbooms during the film's climax, Sunset Shimmer steps up and sings on the band's behalf. Her help not only gives the Rainbooms the strength needed to defeat the Dazzlings, but she also undergoes a half-pony transformation like her friends. Afterward, Sunset joins the band as a singer and guitarist, and she uses her old journal that she communicated with Princess Celestia through to write her friendship reports to Princess Twilight Sparkle.

During the credits, Sunset is seen having now been accepted by the rest of the school, as the Cutie Mark Crusaders walk happily with her and Bulk Biceps helps her get Angel down from where he is stuck.

Sunset appears in My Little Pony Equestria Girls: Friendship Games, competing in the Friendship Games in the motocross event. She is a part of the Wondercolts' team. She is tasked with keeping magic out of the event, but she gets worried that she might fail at understanding how magic works in the Human world and that she doesn't have Twilight Sparkle to help her with her task.

When human Twilight's device starts gathering magic from the main characters and releases it under pressure from Principal Cinch, she becomes overwhelmed and corrupted by the power. Sunset uses the device to harness the magic of friendship from her friends to stop Twilight's rampage. In the end, Sunset realizes that she is fully capable of solving her own problems and that she can't always count on someone else to do it for her.

Role in the Series

After Scroopfan had been doubtful of having Equestria Girls being mentioned in the series due to it existing mainly to compete with merchandise, he finally allows Sunset to have a first appearance in The Tallest Talltales EVAH! where Twilight depicts her in the last story once again as an antagonist who reforms in the end. But she also makes an appearance in Reverse of Fortune, where in the alternate reality, she takes Twilight's place and ends villainy in the UUniverses and becomes the supreme Empress. But she discovers what happened, and fixes everything herself. She not only regains her old memories, but she still retains her memories of the reality, learning of Twilight's outside life. In the series, it is revealed that she grew bitter and dishonest and determined after a tragedy with her sister, who is none other than Starlight Glimmer, the two being raised by one of two divorced parents, and even had Garble as her transferred dragon assistant. With her sister disappearing after committing a terrible deed, Sunset got bitter, blaming herself as it eventually grew into the bitter and greedy Sunset that caused the events of the comic Fall of Sunset Shimmer, in which she was obsessed with the mirror portal until it resulted in her banishment and her departure into Human Equestria, where she started out as curious as Twilight was on her first day, as her home's alternate lifestyles and her attempts to get used to every elaborate part of her human body earned her mockery and scorn from the local inhabitants, which didn't help after the bitterness she went through with Celestia. She pretended to be mentally-retarded as an excuse for her Equestrian behavior, and tus gained enough funding from a disability program to afford all she needed to fit in with the dimension, including gaining an apartment and food. She set off events before Twilight arrived, and after she was defeated in Equestria Girls, as revealed in Reverse of Fortune, she was forgiven and celebrated for having a change of heart (Though students still hate her a bit), and not only was she made the new Princess of the Fall Formal, but she also got back together with Human Flash Sentry a few weeks later, and became a celebrity for TV shows following the humans' discovery of Equestria's existence, and explained her world's customs to everyone, not caring if they believed her or not, as long as it was to have a laugh. After the second film, Sunset had become more than a TV celebrity, but she became a rockstar with the Rainbooms. Though following the third and fourth film, she soon starts to admit that being famous was starting to wear off on her and she wanted more to her life, even hoping that she wouldn't fall down the slippery slope of her past again, developing a quarter-like crisis, a phase which her friends say 'is a more human quality'. So she decides to admit it to Twilight, and with the help of her new friend in the form of the Human Equestria's version of Twilight, Sci-Twi, she was able to use her book to build a portal to Equestria the same way Twilight did, allowing her to visit Equestria whenever she liked, doing so previously by having Twilight externally activate the portal to allow her entrance, though face a big problem in the form of an AUU millipede alien. She also earns her own seapony form as a reward from Queen Novo for her help in The Dimension Storm so she can visit Seaquestria and any underwater Equestrian civilization however she wishes, and this allows her to even breath underwater by donning a mermaid form. 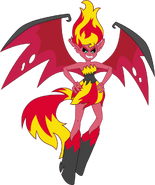