Start a Wiki
The Superior Operations Taskforce Agency, better known as Super Ops, is a Superior law-enforcement branch that was created by Master Algorithm to help take care of massive crime rate and provide assistance to the Justic Teens or some other heroes. They are all commanded by the reformed quantonium scientist Aaron Solaris who had proven himself worthy of being a master sergeant of a taskforce long before the Justic Teens evolved, and lead by a highly-experienced agent named Major Chance. The Super Ops are a futuristic version of S.W.A.T, consisting of a wide range of weaponry and powerful vehicles and technology, meant to take on Superiors and Non-Superiors.

The concept of the Super Ops was speculated by Grotch Prometheus, and he was the one who began the funding that was required to bring this police force to life. Of course, this took years and years of business and financing to get it finished. Grotch had to have help from 7 science companies to provide the power, and he needed to have enough money to get it finished. He never found the funding to do it before The Big Shake caused by Master Algor. This caused half of the funding to drop due to severe money needs following the various Superiors that survived the massive earthquake that nearly destroyed the planet. Their funding was put on hold during the creation of the Civil Criminal Trade community that smuggled resources to control survivors enough to spark the Kratosian Civil War, which had ended following the apparent death of the leader of the CCT, Lord Kilopann Genocide, and thus, once the planet was repaired, Grotch continued revitalizing the funding for the police force.

Unfortunately, he was unable to gain the funding himself and died before it could happen, leaving Master Algor as the new leader, and to ensure that he properly learned from his mistakes with the Big Shake, he replaced most of his body with platinum machinery and armor, which was able to keep him alive for a long time. Algor, out of respect for Grotch, continued his attempts to fund the new police force, but couldn't find proper people to be a part of it. However, when the events of Superior Planet came forth, he found his first potential member, his quantonium scientist assistant, Aaron Solaris, who had taken boot camp in half his life and knows a bit about fighting. When visitors returned, he no longer needed to hold his family's plans for a supercontinent, and he spent part of his time correcting his wrongdoings, and has been able to fund the police force much faster now that visitors were in the marketing of Kratos, and enjoyed visiting the place.

Within a few years, Algor was finally able to gain enough money to bring the police force to life. He privately advertised it to several other police forces, and he gained Major Chance and Agent Kafka. Major Chance became the prime leader of the force, which Algor has named the 'Superior Operations Taskforce Agency', Aaron Solaris became Major Chance's protégé and the Master Sergeant, and Agent Kafka had become Solaris' partner whom he starts to fall in love with. Algor then gets another person to be another leading member named Corporal Tracker, who leads the Major Forces, the heavily-armed and armored forces of the team, whereas Kafka is the leader of the Minor Forces. In no time at all, hundreds of recruits signed up for the force.

Then once the Justic Teens were formed, Algor believed it as the perfect time to finally make the Super Ops public. After an announcement of their patrol at the Prometheus Temple, the Super Ops had become a public police force the nest day, and all the soldiers there were ready to patrol the cities. Hundreds of Super Ops bases were made in Kratos, and each had the same types of vehicles, equipment, weaponry, armor, and strategy that made them a perfect police force.

The Super Ops is similar to S.W.A.T, with similar weapons, strategy, and forces. The Super Ops has several differences, though. Because they were provided with technology from 7 different science corporations, they have a ranged selection of equipment, vehicles, and robots to help them fight crime. Their ranks are among the most complicated, and they come in 2 forces: Minor, which has small less-armored soldiers with low-level technology and weaponry, and Major, which has much more armor and high-grade technology and high-level offensive. Their strategy and technology is so well combined, not even a Superior team could elude them.

The ranks of the Super Ops depend on what the Superior wishes to be on. The recruit can choose one of 6 branches: Minor Forces, Major Forces, Special, Forensics, Medical, and Administrative.

The Major Forces are the only ones permitted to use all forms of major equipment. The Minor Forces are permitted to use equipment as well, but their equipment is low-grade. The Minor Forces are given Kevlar vests and even helmets with red lenses and a comlink as the main uniform. They only wear the helmets during major battles or in extreme environments. The Minor Forces are permitted to have small iPad-like devices that can control their vehicles, they have special riot shields made from uranium, several jamming devices, they have small hacking devices for computers or technological locks, and they are even allowed to have their suits' colors changed with a push of a button, which can turn the black and grey parts into tan, green, blue, or white to provide great camouflage.

The Major Forces are given access to higher forms of equipment. They are given Kevlar/Nomex vests inside flexible and durable combat armor which is able to withstand several forms of damage, and cyan blue helmets are also given. The helmets are used in the same way as the Minor Forces, and their suits can also change color. The Major Forces are given access to stronger jamming and hacking devices, and they are even given iPad-like devices that not only control their vehicles, but also the various drones that hide out waiting for an attack, and certain soldiers are given jet packs that allow them to fly, and the jet packs do not acquire that much fuel. They are even given holographic disguise systems for certain emergencies.

The Minor Forces are only allowed to have access to Level 1-2 weaponry. These include pistols, handguns, submachine guns, assault rifles, or carbines. And the weaponry is all given munitions of not just average bullets, but acidic bullets, projectiles, pulse weapons, exploding bullets, adamantium bullets, and pyrotechnic ammunition. They are even given stun batons that are given an energetic swing that shocks the superpower capabilities and renders them useless, but these require power to work. They are often given other forms of melee weapons such as electronic spears or batons with spikes that send a painful shock to the victim and knock them out. They are even given a small range of explosives such as thermal detonators, frag grenades, flash bang grenades, and shock grenades. Some of which can be launched through their assault rifles.

The Major Forces are given access to Level 1-4 weaponry. These include not just Minor Force weapons, but also shotguns, sniper rifles, grenade launchers, chainguns, and rocket launchers. Also, they have not just Minor Force ammunition, but also electronic projectiles, shockblasts, fire projectiles, lasers, heat-seeking bullets, and armor-piercing bullets. Their melee weapons are not just Minor, but they also have laser pikes that look similar to a lightsaber, but are not as lethal. They only shock victims. They are even given a much wider range of explosives such as liquid nitrogen grenades, flame grenades, gas grenades, sticky grenades, and pyrotechnical.

Minor Forces are permitted to have Level 1-2 vehicles. These include 3-wheeled motorcycles, armored jeeps, armored trucks, flying armored jeeps, and flying armored trucks. The bikes do not come in a flying variant, but they are 3-wheeled fighting machines with titanium armor, and 2 front-mounted guns that fire heat-seeking bullets. The jeeps can carry up to 5 people, and the trucks can carry up to 10, each being covered with uranium armor. The ground vehicles are useful for ground attacks whereas the flying vehicles are useful for aerial attacks. The jeeps have automatic drivers, have black translucent windows, are each in 6-wheel drive (unless it's a flying jeep), and are black, gray, and cyan blue. The trucks are much stronger than the jeeps, and can travel much faster. They have the same color, auto-driving settings, black windows, and 6 wheels, but they carry more infantry, carry weaponry, have 2 side-mounted railgun turrets, and they have radar systems that detect danger in a 5-mile radius.

Major Forces are given Level 2-4 vehicles. While not comfortable to having jeeps, they are granted not just ground/flying trucks, but also ground mobile command center trucks, gliders, and helicopter-like VTOLs. Each of these vehicles are coated in neutronium armor, and most of the selection of these vehicles are capable of flight. The trucks are the same as the Minor Force trucks, but have different armor. The MCC Trucks are large semi-trailer trucks that Minor Forces are able to operate in, but not control, only to be controlled by Major Forces. The truck carries a large trailer which contains the base of operations, and inside has several computers, cells, compartments for other vehicles, and labs. It has neutronium armor, has the same color as all other Super Ops vehicles, and it's got the major communications system which commands all vehicles and robots. Gliders are among one of the most difficult vehicles to ride on. Major Forces have to have strong balance, stamina, and reflexes. They are very similar to the Green Goblin's glider, and are equipped with railgun turrets and grenade launchers. The VTOLs are flying vehicles with 2 turbines for flight, the design of a helicopter, and the firepower of any other Super Ops vehicle. They have black, gray, and cyan blue coloration, black windows, have an auto-pilot setting, can travel very fast with rear jet-propellers, have neutronium armor, carry weapons and a radar system, and have 2 side-mounted turrets that fire missiles and electronic pulse blasts.

Robots are a common force in the Super Ops. They come in 3 different classes, each class referring to their design, offense and defense. Each robot is commanded by the Major Forces by either their iPad-like devices or through the computers in a MCC Vehicle. The robots have the same strategic planning as the Minor and Major Forces, but have much more stronger intelligence and cunning. They attack in either the air or the ground, but mostly in the air. The robots, like all other technological advancements, come from the technology from the 7 science companies that made the Super Ops possible.

Members and The Usual Suspects 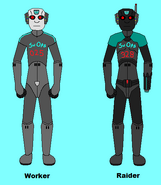 Super Ops Class III Megadrones
Add a photo to this gallery
Retrieved from "https://spongebobandfriendsadventures.fandom.com/wiki/Super_Ops?oldid=114989"
Community content is available under CC-BY-SA unless otherwise noted.