Taggart Novolasarevzkaya the Θ is an Alternate UUniversal Gargarilla from Planet Roozsia. He is a member of Team Positron that serves as the Heavy Tanker. He is the third member of the team, and his history is not widely known by even his teammates. What they don't know was that he used to serve Doctor Ogel until he betrayed them and was left in the snowy wastelands to freeze to death. To this day, his history is still unknown to his teammates. Taggart is no pushover since he is the largest of his team, and he has proven to be the toughest, too. He wears a suit composed of a uranium alloy that blocks various gunfire, and his head is covered by a supersoldier helmet that he collected as a child, though part of his head is seen. He is known for wielding virtually any weapon that is too heavy and powerful for normal people to use, collecting any he gains as a trophy to be used later. Though his main weapon is a high-powered plasma cannon that deals enough damage to incinerate an entire building, which he nicknames 'Aosha'. He also loves sandwiches of all kinds.

Taggart was born on Planet Roozsia, and was raised in an orphanage with no parents. He was finally adopted at age 17 by a rodent military sergeant which had pushed Taggart around like he was his size. At this age, Taggart was a soft person who didn't believe in violence that much. But when he reached age 20, he discovered how invigorating military work was thanks to the stressful training exercises of his adopted father. In fact, Taggart was about to go through a supersoldier experiment since his adopted father worked for none other than Doctor Ogel, who was trying to provide the Yellow Revenant with some supersoldiers to help wipe out the Oaxan Military. Of course, Taggart's adopted father, as strict and harsh as he was, knew nothing of Ogel's true nature and thought Ogel was for a more legitimate military cause. Taggart even kept a supersoldier helmet he found as a little child that was his size. But eventually, Taggart's father finally saw the truth and wanted to keep his son away from the mad Ogel by exposing him to the Oaxan military, but was only able to expose the illegal substance operation and died before he could say Ogel's name by the hands of the doctor himself. Ogel was forced to grab Taggart and run with the experiment cancelled since the substance was going to, and has been, destroyed by the Oaxan military.

Taggart found himself under a new-step father after being lied to that his previous one died because of the Oaxan military, and had soon been manipulated by Ogel to fight in the Yellow Revenant. He was among the few to survive the fall of the Revenant, and he was made a personal servant to Ogel, and was eventually chosen to be the test subject for another supersoldier experiment. But Taggart had seen how evil Ogel was when he discovered that he murdered an Oaxan military soldier and framed Ace the Alpha for it. Especailly when he long discovered secretly that it was Ogel who killed his adopted father who caused the attack to begin with because of Ogel turning out to be a Villains Act correspondent. So he decided to betray Ogel and sell the supersoldier substance to the AUU Grand Council for safe-keeping. And it thankfully was successful before Ogel came back. Ultimately realizing this after destroying the Oaxan military, Ogel was angered at Taggart for turning on him, and already calulated why Taggart did it and already decided turning him to his side is 'computably impossible', and threw him into the snowy wastelands of Roozsia as punishment. That was when Ace and his partner, Elowen, found him and made him a part of Team Positron. Since he couldn't risk getting arrested for being part of Ogel's forces, he refused to tell them where he came from. 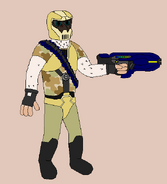 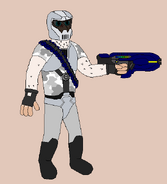 Snow Camouflage
Add a photo to this gallery
Retrieved from "https://spongebobandfriendsadventures.fandom.com/wiki/Taggart_the_Theta?oldid=176052"
Community content is available under CC-BY-SA unless otherwise noted.