Start a Wiki
Taiku is a dragon/human who has a dark, but famous history. He first appears in the SpongeBob and Friends Adventures Chronicles series, where he is Haku's youngest brother and Twilight Sparkle's oldest and best friend who met Twilight 10 years before My Little Pony: Friendship is Magic Season 1. He likes to have fun, go on adventures, be a huge party animal and goof off but is both smart and wise like his eldest brother. Like Haku, Taiku was born the biological son of Maleficent from a union with the Dark Dragon. To prevent the brothers from facing the hardships Kovu did, The High Council send them to live peaceful good lives in different worlds. However, Taiku did what he could to survive which involves raiding towns, terrorizing people and stealing livestock and other food to eat, but his rough live changed when Princess Celestia saved him from getting slayed by a mob of angry villagers, knights and dragon hunters just as he was close to death's door and took him to Equestria where he made it home. Eventually, when he was old enough, Celestia invited Taiku to attend Magic University, and he learned everything about magic and dreams to become one of Princess Celestia's top protégés while his elder brother visits him from time to time. But when Taiku meets Twilight who has the same plans he has, they have a big rivalry with each other which leads them on a big adventure to stop 2 different evil forces, and along the way, they reconcile, and become great friends. After their graduation, Taiku and Twilight went their separate ways and haven't seen each other since. Then, when Taiku heard Twilight finally became a princess, he dropped by for a visit, and even hung out with the Shell Lodgers and Twilight's new friends.

Role Outside the SpongeBob and Friends Series

Taiku now has a career in Tman's Fanfictions on Deviantart which is currently Tman's parodies of The NeverEnding Story (with the Lord of the Rings Trilogy/The Hobbit Movies/Chronicles of Narnia e.c.t.) in the mix with him and Haku as the role of Valcor. Taiku will star in many rolls to come like Baloo in Tman's Junglebook/Tarzan and the Lion King fic, The Fantasia Book, Sebastian in Tman's Little Mermaid remake of King Huffman's fic on the forgotten disney classic, The Black Cauldron staring Ash Ketchum which is now rebooted and so on. 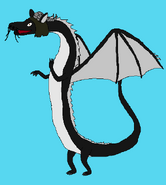 Twilight and Spike riding on Taiku
Add a photo to this gallery
Retrieved from "https://spongebobandfriendsadventures.fandom.com/wiki/Taiku?oldid=125311"
Community content is available under CC-BY-SA unless otherwise noted.