Start a Wiki
Telthona S. Tenma, AKA Telthonatron, is an Alternate UUniversal Clatam from the Planet Zirciania. She is a cyborg hero who posesses incredible abilities and attributes. She was once a teenage girl who was an A+ student in biomechanics and cybernetics at school who was a victim of her evil father's payback plan, and winded up becoming a cyborg. She went on a cosmic adventure to stop her father for 3 years until he was betrayed by one of his colleagues and killed. From then on, Telthona declared to protect the Alternate UUniverses from the evils of the Villains Act. She will soon become a member of the Heroes Act during the recovery of the destroyed Villains Act. She is actselly good friends with Hudson Turbo. They are in the "strictly" friends area since she sees Hudson more like an inter-racsel brother, even more so since she is tecnecly neutered due to her cyber-enhancedment. She does what she can to help Hudson to overcome his doubts about making Xandy his, and help him somehow convince Xandy that Cliff has no disires for a member of his own spieces.

Telthona was born as the daughter of two scientists on the global city planet Zirciania. She was a sweet child in her younger days and was fascinated by her parents' career as the owners of Techma Corps, a military cybernetics facility meant to upgrade soldiers with advanced prosthetics which would take cybernetics to the next level. However, at the age of 6, she was shocked to discover that her father, Dr. Tarold Tenma, had left Zirciania for an unknown reason. Yet, her mother knew what really happened, but kept it a secret from even her own daughter. At age 17, during a time when the Villains Act came into reality, Telthona was an A+ high school student who got high grades in sciences and mathematics, and could even finish a test in only 2 minutes. She was a genius, and knew she would become just like her parents. Soon, she got an internship at Techma Corps, and learns of many Class 1 Projects currently in research. But she secretly learned about a classified Class 5 Project that her father had been working on before his disappearence. It was a top-secret armoured prosthetic prototype called the Aluminite Prototype along with it's blueprints that had to be protected at all costs. Despite keeping this to herself, she does okay at the corporation for 3 weeks.

But when an unknown member of the Villains Act broke into the labs at night in order to steal the Aluminite Prototype, Telthona defended them, only to wind up having part of her body destroyed, and the cybernetic blueprints and prototype were stolen. Telthona's cyberneticist mother then brung her back to life as a cyborg. When she thinks that the loss of the Aluminite Prototype was all her fault, she vowed to get it back before it was too late. Telthona set out into the cosmos to search for clues on how to find the blueprints with her newly-developed cyborg abilities, but at no prevail because she was unable to find the identity of the anonymous villain.

However, 3 years later, when she was about ready to give up, she discovered that her father was responsible for the theft of the prototype in an attempt to get revenge for the loss of his job, as well as part of his body. Dr. Tarold, with the Aluminite Prototype, then became Techno Tarold, a cyborg master of destruction, who sought to create mass genocide just out of spite. When Telthona returns home to take these up with her mother, she reveals that her father was secretly working for the early Villains Act empire on Peerbon in an attempt to provide the villains with destructive cyber-technology in order to get more money, mainly the Aluminite Prototype and the blueprints he stole. Once his plans were discovered by a worker who called up the Alpha Federation, the HPA arrived to shut his experiment down, and fire him from his job. He tried to fight them off at gunpoint, but they knock him into various chemicals that poison his body, and he was sent to a Zircianian Prison. Telthona concluded that the Villains Act broke him out of the prison, and aided him in getting his Aluminite Prototype back so he could continue his intentions. She then went off to find him and stop him.

She eventually found her father at a secluded Corruption Co. building on the lawless planet of Peerbon. There, Tarold revealed he may not have been able to make his company go back the way it was due to the new Corruption Co., but he was able to get all his research back and has made a hundred new Aluminite Starbots that are soon to be introduced. Telthona tried to stop him, yet even with her incredible abilities, Telthona was almost unable to stop him since he was twice as powerful as her. But eventually, one of Tarold's own minions, A Venzysaur named Reptilious, betrayed him, shot both of his arms off, and shot him straight into a vat of molten silver. Reptilious then activated the self-destruct to destroy the Aluminite Starbots, and the two escaped in time. With the Aluminite Prototype and it's blueprints destroyed, which was for the best, Telthona felt a bit depressed due to the fact that her own father did this, but she was still deemed as a hero.

From that day forward, Telthona vowed to protect the Alternate UUniverses from the villainy of the Villains Act. She fought the Villains Act many times, but the villains were just too powerful for her to handle. So, she gave herself some upgrades and managed to stop many evil plans. Yet when she realized that the Villains Act was finally over, she decided to return home and retire. But when the Alternate UUniversal Grand Council called for Telthona to come join the Heroes Act, she will finally be able to be more than she realized.

Being a cyborg, Telthona has increased physical strength, reflexes, endurance, intellect and stamina. She can run at a fast speed of 60 mph. Her new cyborg body is more durable than her old body, and with her new cybernetic eye replacing her old bad-visioned eye, she can see better than any other Clatta. But she can also see in thermal imaging, and night vision. She also has jet shoes, giving her the ability to fly. She can also transform her hands into large dual plasma cannons that do a large deal of damage.

While tinkering on her prosthetic parts since her 4th battle with her father, she had given herself a nanobot repair system, allowing her to easily be repaired when damaged or injured.

Her UIS identity TeTe Hellatrix, nicknamed Teah, is a cyborg Gromnule, or a UIS glyptodont-like rodent that can roll at vast speeds. Thanks to the designs of Reptilious, her cybernetic enhancements allow her to holographically see where she rolls, her cybernetic limbs can spin to act as walking legs even when curled, disguising her as a walking battle droid. Her shell is made of electroactive armored polymer that can respond to her to nervous system, and can sprout plasma spikes of any length. She also has an Aluminite Prototype on her flexible armor for added protection, added by an electroshock matrix to defend against people. She's also armed with electrobeam blasters that fire electronic lasers as fast as lightning and can stick out from her arms when she's rolling, acting like turrets. Though because of having done going as Hellatrix, basic Telthona had started to take up acrobatics and gymastic training because of having gained a Gromnule's need to be as active and mobile as possible, having realized that "The Old Telthona" was pretty much a tank in a very mobile group and felt like she needed to keep up, of which was an unexpected but beneficial side-effect of the identity swaps. 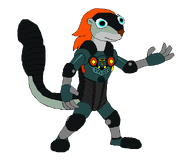 TeTe Hellatrix
Add a photo to this gallery
Retrieved from "https://spongebobandfriendsadventures.fandom.com/wiki/Telthonatron?oldid=172116"
Community content is available under CC-BY-SA unless otherwise noted.