Start a Wiki
Ruther G. Lawmode, nicknamed Tether Ruther, is an Alternate UUniversal Human-Rabodan hybrid from Planet Marbon. He was raised by a human mother and a Rabodan father who worked for the Rabodan Military since the foundation of the Human Protection Agency. The two raised him as he was oppressed and bullied by hybrid-haters, earning him his nickname of 'Tether Ruther' as they used to put him on a leash like an animal due to the classic profanity of 'hybrids being mentally-brain-dead in unnatural genetics'. However, the couple were gunned down brutally by The Extinctioners. His mother was killed when she was moments from giving birth to another hybrid, and his father was killed for 'blasphemy by marriage and conception with a defective race'. Ruther was a rookie in the military when the murders occurred, and thus he wished to be put on the case of hunting down the Extinctioners to avenge them. However, Admiral Vol Krugum refused it because not only was he a rookie, but he has done a lot of mistakes that costed them the oppertunity to know about the Extinctioners' True Hideout, because he always ends up killing the member who had the info because they keep crossing the line of insulting his heritage, and the fact he would end up a liability that'll only make things worse in light of recent tragity and that even if he nails the Extinctioners hard, they would only grow back stronger then ever, even if some very impourent leaders were lost. However, he disobeyed him and actually managed to give some good clues that earned him the chance to prove he can do something helpful. However, because of his defiance and that it once again lead to another impourent Exinctioner's death because he was the general to ordered the death of his parents and that Ruther failed to emotionally control himself, he was court martialed and taken down 2 ranks as punishment. Realising that the Rabodan Millatery doesn't meet his interests to bring absolute justice and punishment to the Extinctioners, he decided to prove them wrong on his own, and deserted the military. Since then, he was dubbed a criminal, and a reward was offered for his capture so he could be drawn in court. However, adding more to the trouble, the extinctioners also have desided to get hunt down Ruther, thus Overlord Gen I Side orders that Ruther be killed on sight, hoping to use his criminal record to his advantage. But when he rescues a hybrid camp on Trecene filled with dozens of human hybrids from being destroyed by the Extinctioners, Trecene's president, Madame President Emeoyx orders that his criminal record be expunged. But the Rabodan millaterry reused the order under grounds that one, only Baroness Corona Ellames can make such a call, as well as Vol Krugum, and two, he robbed the millatery another oppertunity to finally learn of the Exinctioners true location AGAIN by murdering another higher up AND was the last one behind Gen to know the true location. Helpless to do otherwise with the Baroness unfortunately siding with the Admiral cause, while understanding Ruther's sorrows and his legit heroics, agrees that he ended up making it harder for the millatery to take down the Exinctioners honorably and correctly and only encouraged their bad behavior using death as a punishment, even if it was because they were the worse of the worse and because of his family pride being insulted, the Rabodan Military, including Vol Krugum's rotten nephew, Soto Vol Krugum, who hate Ruther for the lost oppertunities he caused during his mistakes, still chase after Ryther. Cause of this, Ruther ends up beliving that he is alone in delivering absolute justice to the group he deems too unredeemable to just be made to rot in prison. Ruther now believes himself as his mother's race's only hopes of staying safely within their dimensional sanctuary, and he does this with the help of a former military scientist named Professor Aberrant, whose brother works with the Extinctioners because he fears the humans for more than what Gen thinks in them.

Ruther is a military-trained fighter with great skill in Rabodan firearms. His Rabodan biology gives him combat-bred biology, and his AUU human abilities give him adaptive DNA and thus gives him a genetic anomaly, one unknown to the humans themselves, that increases his physical capabilities, which can be activated in a human with the right diet, physical condition, and health. He can take down machines with little effort with these genetic anomalies. Also, to live up to his nickname, he wields kinetic tethers that allows him to grapple, subdue, and immobilize his opponents.

His AUU identity, Steyve Roevinger, AKA Stink-Eye Steyve, is a taciturn Human-Terman hybrid (formerly Boldan-Terman hybrid) with near-similarities to Ruther, but he has a disfigured left eye, with which to intimidate his opponents, he wears a tech robe with built-in armor, an ISD port, and wields Rahgnall weaponry. He also possesses the same genetic anomaly humans have, unlocking them when he he was pushed past his limits fighting against Mitch Mixenmatch. 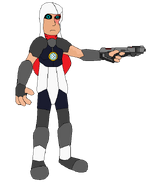 Stink-Eye Steyve
Add a photo to this gallery
Retrieved from "https://spongebobandfriendsadventures.fandom.com/wiki/Tether_Ruther?oldid=174045"
Community content is available under CC-BY-SA unless otherwise noted.