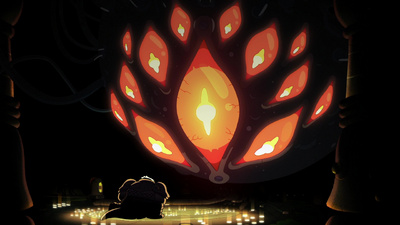 The Last Bestiaran God, known by many other names including Mysterious Entity and The Night, yet concurrently has no individualized name, is an enigmatic creature from Amphibia and the secret master of King Andrias. It is possibly the true central antagonist of the series as a whole.

(Currently in progress until Season 3 of Amphibia expands upon him...)

In the SAFA timeline, the Mysterious Entity is revealed to be the last god existing in The Bestiary Dimension, the home dimension of Amphibia, and is specifically the Bestarian God of Natural Selection, Extinction, and Superiority. When it was foretold that the dimension would be destroyed, the Bestiaran God refused to believe it and did all in his power to prevent it. Instead, he only failed as the conquest of King Echidian, who rounded up armies from countless world including half the ancestors of Andrias who were conquerors to start an interdimensional empire. This resulted in the realm's destruction to one of The Xexaxez. Later, the realm was restored by a Resurrectorate, Echidian announced to the entire realm his curse, which would prevent history from repeating itself by reducing all monsters in the realm into an animal intelligence. As a result, because there was no one left to believe in the Bestiaran Gods, they began succumbing to morality illness and dying left and right. Thus two gods remained: the Bestiaran God and the Prophet Goddess that foretold of the destruction. Fed up and feeling like, as gods, they were too weak to do anything, the madness drove him off the edge. He thus swore to use the Calamity Objects to enter the Nothing Dimension and destroy all Xexaxez, not aware that he has been infected by Mlandoth, to be a seed of a new strain of Deviant Outer set to upset the needed balance of Destructor Outers and to be a progenitor of such via his destructive revenge onto the Xzars, which in the process had shattered the Unity between frogs, toads, and newts by releasing a giant Great White Heron infected with an illness that drove it to eat out of control, scaring the frogs, toads, and newts to separate. He would thus try many attempts to it, but he had obstacles and another prophecy that would foretell that Amphibia and other worlds, including the Earth of Anne Boonchuy, Sasha Waybright, and Marcy Wu, would merge into one, beginning with the destruction of the Bestiaran God. He would thus be the one who causes the climax of 'True Colors' by corrupting King Andrias, lying about his ancestors being conquerors, when they have all but renounced that past when Echidian announced his curse to join the other half of the family who were peaceful explorers and scientists. He would begin his quest to find the three girls and steal all the remaining power of the Calamity Box's gems and get what he needs to enter the Nothing Dimension and exact his revenge.