The United Usurpation Force is an Alternate UUniversal Isolated System "Alliance" Faction that is a major reoccurring (If not nessersarly a severe) headache to the Union of Independent Systems, that believes that United Sentient Races Alliance are the true leaders, not UIS, seeing them as menaces that need to be corrected, a real classic case of the UUF not looking itself at a mirror. They consist of select individuals "wronged" by UIS and originating in isolated sectors of each universe and wish to be free of UIS' isolation practices when these practices inadvertently caused them some trouble as the otherwise well-intentioned aim to encourage independence from a far than perfect USRA that faces risk of unreliability at best and corruption at worse, lead to cause constant wrongdoings and penalties that drive the angered such folks to join forces and form the UUF. However, it may have the trimmings of an alliance, but at most they're a faction of individuals that're nothing more than another ho-hum rebellion against UIS, and not even an extremely competent one as they have a ludicrously infamous history of failing to establish their influence outside of Usurpia, the base planet, save for extremely few number of planets that they're slowly losing or had no leg-room in anyway. This group has tried for a long time to look like heroes "Standing up to oppression", but really, they're just another flavor text for mindless UIS haters that often either ended up dooming themselves or became no better than the villains and criminals running amock of the isolated systems.

(More as they are revealed). 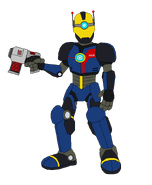