Start a Wiki
Tollund S. Quspillian, AKA Rebellion T, is an Alternate UUniversal Ojutan from Planet Mieber. He is an agile and powerful primate who wields a large pulse rifle and always wears a mask with several functions. His world is known for being a utopia which is under a totalitarian regime which states that "freedom liberties" are banned in response to the planet's sun Corruptus/Maaphus. Surveillance by the police force is upped, citizens are watched, and even swearing is forbidden and punishable by fines that increase when the offense is repeated. In response to this outrage, an Underground evolved after a protest ended horribly and resulted in people forming an underground society where they were free to have liberties. Seeing this as a threat, President Hackagon needed to have a double agent to reside in the Underground to make sure it doesn't go too far. That double agent was Tollund, who was authorized to always keep his mask on to conceal his identity from the Undeground, and earn their trust as a savior and a hero. He is looked up to by the Underground's members, especially Hope Qonnors. Hopefully, his achievements and his determination will earn him a spot in the Heroes Act.

Tollund was born on Planet Mieber in a city not too far from the capital city of Glasion. His father was killed by outsider drug dealers whom he owed a lot of money to when selling illegal gene drugs to him. They killed him in his sleep on the same day Tollund was born, and ever since, his mother raised him on her own. Ever since hearing about how his father died, he felt horrible and feared that that same thing could happen to others, so he soon joined the police when he became 22. He then signed up for a special program which would boost his skills without the need for augmentation as the augmentation serums on Mieber rarely worked and resulted in death. Virtual training chambers enhanced his senses, agility, reflexes, intelligence, perception, endurance, and so many others. He was even given his own personal supply of weapons. Eventally, the outsider drug dealers were captured when they made the mistake of trying to kill him personally after fearing he would get payback, but by showing up, he got payback anyway as they were no match for him. While the drug dealers were properly punished, Tollund was promoted from the police to the famed Mieberian Order Force when he became a quick favorite to it's leaders.

But things got out of hand when protests erupted about the long established, since litterally the dawn of Mieberian's order age from the Solar Flare war, bans of 'personal liberties' as some people saw it as unfair. This resulted in some of the protesters threatening to kill alot of people if they didn't comply, which the enforcers lead by General Glutus Maximus were forced to make a controverseal desidtion by shooting down armed protesters, which sadly many unarmed ones were caught in the crossfire either by mistake or a poor reaction to something mistaken for a weapon. This included the parents of Hope and Tamara Qonnors, who were among the armed protesters threatening to kill over petty things. Tollund heard Glutus made an order to capture protester families to be placed in high security orphanages and to have their memories erased. While understanding that the parents doomed themselves, he felt that it wasn't a fair fate for their offspring. While Tamara disappeared, Tollund saw Hope running away from the MOF and was cornered in an alley. Tollund rescued her from them and looked after Hope until they found her older sister. When asked who he was, he did not answer and left.

The next day, Tollund was put in court martial by Glutus when word reached him about Tollund rescuing Hope, Glutus insisting that Hope's parents could've raised her poorly, and that she's a "corrupted animal of Corruptus" waiting to happen and that she must be placed under heavy lock and key. Tollund argued that though it's understood that Hope's parents were proven armed and dangerious, Glutus did NOT had prior proof NOR prior approveal to "gun down protesters over mundane things", arguing that it's Glutus' own fault for causing controversey and tainted Mieber's reputation, following careful orders aside. Grutus insisted that he didn't had a choice and people would've died anyway from a riot and massive gunfights from protesters and orderly people being forced to protect themselves from corrupted protesters, arguing "sacrivicing the few for the many", though Tollund warned that the president has contradicuary feelings after having quite an unpleasent encounter with the Grand Council. In order to avoid getting arrested and accused of corruption, Glutus let Tollund go, but warned him that this was his last chance to never interfere without authorization again. A year later, President Hackagon started getting suspicion that the Underground was becoming more proactive in their fights for freedom. Thus he chose Tollund to go undercover as a double agent, earning the trust of the Underground by helping them, and reporting any malicious activity to him. He has been doing this ever since under the undercover name 'Rebellion T', and Glutus was advised to claim that Rebellion T was a former member of the MOF who undermined him too far for treating a family member badly, started resisting orders, and eventually deserted the MOF in favor of the Underground, agreeing to the Underground's beliefs completely. Thankfully it worked and fooled even the otherwise intelligent but not very good with current events Rea Buhl Hackagon.

Tollund is an orangutan-like primate who is naturally agile and has accurate climbing skills. After training in a heightened virtual training course, Tollund's senses, speed, agility, reflexes, perception, intelligence, stamina, and endurance sky-rocketed. He is capable of deductive reasoning, can predict moves, can think quicker, and preceive things much faster, allowing him to react fast enough to attack when an opponent least suspects it. He is a strategist who thinks ahead, takes risks, and can resist high amounts of damage even without enhancements or armor.

His commonly-used weapon is a V5600C9 Heavy-Duty Assault Cannon which has a variety of functions. This weapon is among the rarest in the AUU because of it's power and capabilities. It has multiple functions including pulse blasts, heat blasts, explosive blasts that can do more damage when held, guided blasts, focus blasts, and the rate of fire can be changed to rapid, concussive, or concentrated fire. There are also armor-piercing functions, double-barrel functions, stun functions, ricochet functions, and even a charge function that doubles damage. All these functions are voice-activated. However, this is a very cautious weapon to use, as pushing it too far can cause it to overheat without activating the venting system. This weapon is normally too heavy for most people, and it has mostly been seen being wielded by supersoldiers and cyborgs.

Other weaponry includes tactical ordnance grenades with adjustable power levels, and a variety of other grenades including plasma grenades, shock grenades, and EMP grenades. He also carries a hoverpack that can normally support his weight, but cannot do so because his assault cannon, which he always carries, adds to his weights, thus is only useful for gliding and safe landings. His signature equipment is a mask which he uses to both conceal his identity, and give him extra sight functions including thermal imaging which aids in seeing enemies with cloaking devices, night vision, UV vision, and even helps for communication.

His UIS Identity, Mercenary Merx, is a primate called a Gangatang, which is just as agile as his original species, but he has colored pecs. He is also given Batman-levels of training and even given a familiar backstory, having all forms of job experience in case he needs to get a quick buck and live in an adequate home as a bounty hunter, he is good in gymnastics, escape artistry, studied hundreds of martial arts, he can wield any kind of firearm, mastered strategy and engineering, has natural primate gymnastic skill heightened by intense training, detective skills, has photographic memory, highly-developed kinesthetic senses, hacker, and even has some ability to intimidate. He is equipped with a suit of smart fabric flexible combat armor, a jet pack, an electrode network, his gauntlets and boots come with added thrusters, are powered by kinetic energy to add striking and sprinting power, even making for great kinetic shields to rob any projectile no matter if it's made of pure energy of it's movement, or just use an electric punch, an ISD on his suit to store weapons, which he always randomizes, he wears smartglasses that use holovision, or a kind of vision that uses the Holonet to identify anything or anyone he sees through their HoloIDs, including their physical, mental, and social health stats, their history, their titles, everything, plus UV and infrared vision, but not night vision since his species can already do that. But even though he randomizes his arsenal, his favorite weapon is his holocannon, modeled after Tollund's large gun, but has a connection to the Holonet as well, allowing for automatic targeting of any weakspot, identification of friend or foe, and is automatic, and able to digitally summon any kind of ammo into it's cartridge slots. The top barrel is for basic fire while the bottom is for launching explosives, claiming he got all this by winning a lottery. His prime means of transportation is a Chopper, a large one-wheeled bike similar to the Halo Jiralhanae Chopper. Like the chopper in terms of a bike and a helicopter, the chopper can glide via it's giant frontal wheel and the thruster-legs that keep the bike up when it wasn't moving. It had cannons just like his gun capable of using holoammo. He's also mentally unpredictable, preferring to do good for money because there's little purpose to him to do the right thing other than a good paycheck. 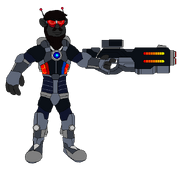 Mercenary Merx
Add a photo to this gallery
Retrieved from "https://spongebobandfriendsadventures.fandom.com/wiki/Tollund?oldid=175745"
Community content is available under CC-BY-SA unless otherwise noted.