Start a Wiki
Twilight Sparkle's human counterpart is an intelligent student that lives in Human Equestria and is mentioned throughout the My Little Pony: Equestria Girls film series. She is a student at Canterlot High School, a former student of Crystal Prep Academy, and the owner of Spike the Dog. She is named Sci-Twi in some merchandise and other depictions. Her alter ego, Midnight Sparkle, first appears as an antagonist in My Little Pony Equestria Girls: Friendship Games. First mentioned in the first movie, she makes her first canon appearance at the end of Rainbow Rocks, curious about the magical activity at Canterlot High. In Friendship Games, she finally appears as a protagonist who is blackmailed to compete in the Friendship Games by her competitive principal, Principal Cinch, all while accidentally causing magic thefts that ultimately cause Cinch to force her to unleash it in order to win the final gaming event. The plan backfired as Midnight Sparkle was born, and after nearly tearing apart her world to get to Equestria in a magic-craving madness, Sunset Shimmer defeats and redeems Twilight. Even Dog Spike, as a result of magic exposure, gains the ability to speak. Twilight then transfers to Canterlot High, and becomes a good friend to the Human Mane Six, briefly meeting her Equestrian counterpart. She still has nightmares from her evil counterpart to this very day even after controlling her vulnerability to returning that way after the events of Legend of Everfree, yet is still easily frightened of Midnight.

Twilight is first mentioned by Pinkie Pie in the film when she brings up the notion of pony Twilight having a "twin sister who lives in the city."

Twilight Sparkle appears after the ending credits, piecing together strange events occurring at Canterlot High School and talking to her dog Spike.

In the third Equestria Girls film, Twilight's human counterpart is revealed to be attending Crystal Prep Academy and is a member of the Wondercolts' rival team, the Shadowbolts. This version of Twilight is portrayed as being rather awkward and curious and treated as an outcast by many of her classmates.

Throughout the film, Twilight attempts to track and measure strange energy readings at Canterlot High, recording all of her findings on a tack board in a secret room at Crystal Prep. She gathers this research in hopes of being accepted into an independent study program, and she only competes with the Shadowbolts to conduct further observations on the weird energy, but also because her competitive principal threatens to revoke her membership of the program she is studying in.

Twilight carries a pendant-shaped device intended to detect the strange readings. However, it also drains magic away, causing each of Sunset's friends to lose their ability to pony up. In addition, it causes dimensional rifts to appear throughout the Games. When Principal Cinch discovers this, she pressures Twilight to release the magic from her device to win the Games for Crystal Prep. Once she does, the magic engulfs her, and she transforms into a monstrous creature obsessed with magic. After her transformation, Twilight uses her powers to open additional rifts to Equestria. Using Twilight's device, Sunset channels the released magic to transform herself. Following an explosive battle, Sunset offers Twilight her hand in friendship, and Twilight accepts. Twilight apologizes for all the trouble she caused, and Sunset and her friends forgive her.

Later, Twilight decides to forego her independent study application and transfer to Canterlot High to learn about the magic of friendship. At the end, Princess Twilight Sparkle from Equestria appears out of the portal, stunned to see her human friends joined by a girl who looks like her. Human Twilight only nervously waves "hello" to her pony counterpart.

Twilight appears as the primary central character of the fourth Equestria Girls film. Suffering from anxieties and recurring nightmares, she fears her evil Midnight Sparkle alter ego will one day return and take over her body, her friends serve as steady moral support, even having a bad dream of it in the beginning.

In Legend of Everfree, Twilight goes with her Canterlot High friends to Camp Everfree, where she is paired up with Sunset Shimmer in the Sapphire Tent and develops a crush on camp co-director Timber Spruce. While at the camp, Twilight's magic undergoes a transformation, and develops the ability to levitate and telekinetically move objects.

Throughout the film, Twilight struggles to confront the dark magic inside her, and she believes she is responsible for several magic disturbances around camp. However, these are later revealed to be Timber's sister Gloriosa Daisy's doing. With the help of her friends, Twilight overcomes her fears and proves to be the key in defeating Gloriosa. She also helps organize the fundraiser to save Camp Everfree from closing and becomes considerably close to Timber Spruce, accepting a date from him in the end.

Like her pony counterpart, human Twilight is well-spoken and highly intelligent. She holds a great interest in knowledge and science, being able to assemble intricate scientific devices and solve complex mathematical equations, and her intellect rivals that of Sunset Shimmer. Unlike pony Twilight, however, human Twilight is socially similar to how she appears in the first episode. She is a bit of a wallflower, acting very awkward and timid around others, especially the standoffish students of Crystal Prep. Despite her problems in socializing, Twilight is eager to connect with people on a personal level, demonstrated in her interactions with Fluttershy, when the two share their love for their pets, and Pinkie Pie, at the Crystal Prep welcoming party. Twilight is shown increasingly distressed by the apparent harm caused by her magic-sensing and storage device to the point where Sunset's eventual accusations leave her distraught.

Twilight lacks self-confidence when under extreme external (especially social) pressures. During the archery competition in the Tri-Event Relay in the Friendship Games, she is so affected by performance anxiety and Sour Sweet's anger at her poor aim that she begins to cry and her legs threaten to collapse under her.

When transformed into Midnight Sparkle, Twilight becomes selfish and malicious, consumed with desire to learn everything about magic even at the cost of her entire world.

Role in the Series

Sci-Twi reprises her role in the series as a friend to the Human Mane Six. She still retains the curious, nervous, and awkward personality as before, but has grown a bit more since then. She is even one of the few who sympathize with Sunset Shimmer when she ends up in a quarter-life crisis, a phase of which, as her friends put it, 'is a more human quality'. Sci-Twi thus decides to help by helping her build a magical portal similar to the one her counterpart uses to enter Human Equestria, and thus allow her to return to Equestria whenever she wishes, as she could only previously do so through Twilight's portal activation upon request. Also, despite conquering her evil counterpart in Legend of Everfree, she only did so at a slight level as she is still terrified of Midnight Sparkle, and thus, without the formal occlumency training her pony counterpart possesses, and an inability to learn it due to incompatibility and inexperience with Equestrian magic as a normal human, she could be vulnerable to mind-attacks based around Midnight Sparkle, making her easy to manipulate to magical enemies like Shroud Master. 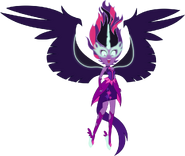 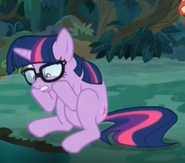 Sci-Twi (Ponified)
Add a photo to this gallery
Retrieved from "https://spongebobandfriendsadventures.fandom.com/wiki/Twilight_Sparkle_(Sci-Twi)?oldid=162701"
Community content is available under CC-BY-SA unless otherwise noted.