Start a Wiki
Ucasashi J. Iidiora is an Alternate UUniversal Qordrill from Planet Juluba. He is a Japanese-style mandrill/macaque-like samurai with technological equipment including a long laser sword, a gliding apparatus, a robe designed for stealth, and knows enough combat training from across his home planet to take down the worst that the Villains Act had to offer, the most recent accomplishment was the self-defensive slaying of Oaglock on the night before he was to be wed to an imperial clan princess, which would play a part in earning noterity in the Grand Council. He was also briefly the boyfriend of Cloakblade until he had to marry an Imperial clan princess in thanks to his extremely genes-purist parents that were not crazy about Cloakblade being a ninja, nor were fond of the HA cause of a high risk factor and fear for family safety, which was actually surprising to him as though he originally didn't want to marry her, he saw so much in her, which is abit more then what he saw in Cloakblade, including a secret samurai past. Thus she asked him to go be with the Heroes Act to help Cloakblade and thus he became a candidate for the Leader Initiative where Councilman Calixto was looking for a leader for the Heroes Act, to the karmic dismay of Ucasashi's parents. When Maverick/Morte rigs the election, he and the other candidates quickly discover who he really is and with help from Nathan Bills, defeat him and make him part of the Heroes Act as second-in-command.

As a primate, Ucasashi is naturally dexterous and incredibly agile, able to jump across elevated areas, have acrobatic capabilities, can avoid gunfire, and he is trained in stealth. He is a sharp and well-trained warrior who can fight even with his eyes closed, as he can quiet down his surroundings. He is proficient in firearms, but his primary weapon of choice is his lightsaber-like sword. This sword, like a real lightsaber, can slice through partially any substance, including organic flesh and machinery. It can be used to reflect projectiles, and he knows how to use it without causing any accidental casualties.

His UIS Identity, Swift Wiang, is a creature called an Ommo, a colorful-tailed monkey that has a lightsaber-like blade just like Ucasashi, but it comes in a different design. But his tail is useful as a prehensile limb, and after training himself on Qio, he has the ability to melt his soul all over his body and use Gex, a kind of life-force energy that works like ki, manifested through his spirit and vigor. Through this, he can wield it in many ways. He is described as a selfless mercenary Gex warrior with a very steadfast code of honor and trust, trusting anyone carefully no matter their background, fighting not just for money, but for honor and glory. He even has a bit of a trickster side to him that nobody expects and his charm knows no bounds. 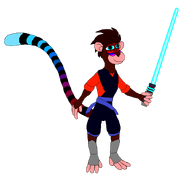 Swift Wiang
Add a photo to this gallery
Retrieved from "https://spongebobandfriendsadventures.fandom.com/wiki/Ucasashi?oldid=175738"
Community content is available under CC-BY-SA unless otherwise noted.