Start a Wiki
Vance L. Zager, AKA Vancer Lancer, is an Alternate UUniversal Jakilla from Planet Nivilsara. He is a former military soldier who dropped out to join the Heroes Act for his speed, stamina, reflexes, and skill in advanced martial arts and pressure point combat. He carries two dual action blasters that can pack a powerful punch, as well as a few plasma grenades and a gold retractable machete.

Vance was born on Planet Nivilsara as the son of a rich family. He was into sports when he was in school, and learned to sprint faster than other competitors, and won many races. He soon avoided an oncoming explosion wave caused by the Villains Act by speeding as fast as a cheetah. He managed to save his friends as quick as a flash, and snatches two duplicate guns from two dead military soldiers, and blasted the incoming bad guys in his way. He won the sprint, and was deemed a hero by his friends.

He joined the Nivilsaurian military for his speed, cunning, and weapon accuracy. He was given some explosives and a golden retractable machete, and managed to take down multiple Villains Act schemes with amazing speed and reflexes. He even caught a guy with a turbo-jetpack with his amazing running speed and dual guns...twice. He stopped so many evil schemes, he was chosen to join the Heroes Act. He accepted, and became an official member.

Vance has a great sense of smell and good hearing, and has the ability to sprint at over 80 mph. He wields many weapons. His main weapons are a retractable golden machete, some plasma grenades, and his favorite, two dual-action M238A Reflexer Pistols.

He eventually obtains a new super suit called the Shootout Suit, which is capable of storing hundreds of weapons in his ISD port, has armor composed of laminated neutronium, can use a recharging jetpack and shield, has a visor that identifies a target and adapts around them, and his physical abilities are doubled. However this suit quickly drains power if used in excess.

His UIS identity, Crazy Downe, is a Baggard, a UIS bat-canine with gliding patagia. He was also twice as trigger-happy as Vancer. He was assumed to have been discharged for defying his superiors because of their mistrust, a conclusion he came to because of what happened in The Weirdest Villain from Space and Bossy Business, in which Zosimo the Smart got him to Class I because he didn't trust him or his own team for their flaws and thus manipulated them, getting them both in trouble. This results in him joining forces with Mathis Hack, a Rephtean griever lord on the planet of Forom Fome, which in turn gets the Heroes Act in trouble with Skeplock H'olmes. This assumed backstory gave Downe a loyalty to nobody as he wields weapons from both the Raghnall and Weaponsky brands. He had an oPad merged with a digiprint pad allowing him to forge anything from the ether using nearby resources. His speed is still on par with Vancer, and he can glide long distances. 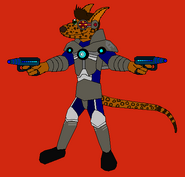 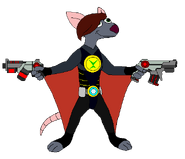 Crazy Downe
Add a photo to this gallery
Retrieved from "https://spongebobandfriendsadventures.fandom.com/wiki/Vancer_Lancer?oldid=171463"
Community content is available under CC-BY-SA unless otherwise noted.