Start a Wiki
Wicked Heart, usually called Wicked Dark Blacken Heart, is an Equestrian pony who has had a troubling childhood, and lived during Equestria's earliest years when the Alicorn Gods were still keeping order. But when Tyranny began his godly takeover and began the Chaos War, he chose Wicked as his first chaotic pony being since she was known to be aggressive, one time striking her own father for spanking her, and she was made into a god-like demon with Draconequus-like powers, and Tyranny ordered her to control ponies into worshipping chaos and disharmony. However, when Tyranny was first defeated, Wicked disappeared without a trace. She didn't plot revenge since she was convinced that her revenge was already done since she thought the Alicorns were wiped out entirely. But when she hears that 2 still remain, she finally makes a new plot of revenge. She was never seen for centuries. However, she witnessed Mayhem's crime and punishment, but was determined that his revenge will fit perfectly with her plan. In fact, she was the one who told Mayhem about Tyranny's legacy, and corrupted him into following his beliefs. Her plan took a thousand years to perfect, and it was all botched when new heroes began standing up against chaos. She then decided that killing off the heroes was required. She is soon to make her move. She has a similar personality and voice to GLaDOS, but her voice is not robotic and actually more like the TF2 Announcer.

Born during the days before the Chaos War, Wicked had been cruelly named after being 'born of witchcraft' in a highly religious town called Crucible. As she grew up, Wicked had a socially weak mind and had an emotionally-fragile heart as she was abused by her religious father and even got heavily punished for the sin of striking him in self-defense, the first time she experienced pure raw emotion. Feeling power, Wicked secretly turned to a pony who believes in Discordianism and a Kaiyas-worshipcult member named Entropy Whirlwind, who experienced something similar as a kid and believed that emotion was an unpredictable and therefore chaotic force and learned to control and master his magic through this. Thus a desperate Wicked asked for his help and became his student, leaving her father and family behind.

However, the day Wicked became 12, Entropy experienced an unexpected mysterious relapse that got him accused of witchcraft and executed, forcing Wicked to return home changed in more ways than one. She had mood swings and mental conditions, as well as hallucinations and imaginary friends, something of which Entropy had as well. By the time she mastered these powers, she discovered the horrible truth that Entropy wasn't doing witchcraft at all and was trying to cure corruption via a device called Pandora's Box and Elpis' Box and ended up getting infected by the Pandora magic and gaining a witch-like half-pony half-Draconequus monster who was immediately put to death by the town and he was unable to explain himself when they failed to listen.

Angered and crushed by the truth, Wicked's emotions flustered and she accidentally destroyed Crucible, leaving only Pandora and Elpis' Boxes. By opening them both, Wicked unleashed countless Kaiyas creations, some of which would become known as Draconequus, and as this causes disharmony, she runs away in emotional turmoil and eventually meets Tyranny, who turns her into an agent of chaos and as the Chaos War began as a result of this, she is tasked with forcing the mortals below to worship the Draconequui as their new gods, and becomes the one responsible for destroying all the Alicorn Gods had on them via sociopathic religion. But she disappeared when Tyranny was defeated, retreating into the Draconequus chaos dimension as Pandora and Elpis' Boxes were sealed away by the Alicorn Gods as they imprisoned Lord Order and Lord Chaos inside each.

As eons passed since the Chaos War ended, Wicked got weaker and inexperienced as she believed her task and revenge were complete. But upon learning of survivors, she returned not too long after Nightus and Heavenslight become leaders of Equestria. She begins her plan by informing Mayhem of the 'true path' of his race and drove him and later Discord evil. With this, among other chaotic plans, she aims to one day restore chaos once and for all.

Wicked is a unicorn just as skilled in magic as an average Alicorn. However her unstable emotions cause her magic to be equally unstable to where the results can be dangerous and unpredictable, as she has two additional horns to control this better. Her Equestrian magic combined with chaos magic affects both her personality, emotions, and mentality, and thus she goes to random mood swings and her feelings are absolute. She can use any high-level spell including transformation, teleportation, shields, energy blasts, mind-control, and she can replicate and combine any magic spell. With her chaos magic, these powers are able to warp and bypass any defense including occlumency.

She can be dangerous upon each base emotion or a similar emotion. When she is happy or excited, her mind is more focused and unstoppable. When she is sad or hurt, her magic is the most unstable and unpredictable. When she is angry, annoyed, or hateful, her power output goes through the roof. When she is scared or sorry, her magic acts on it's own and protects her in whatever way possible. When she is in love, lust, or arousal, her magic becomes more passive than aggressive. Her emotions aren't the same for long and neither is her personality which makes her hard to predict as a harbinger of chaos. 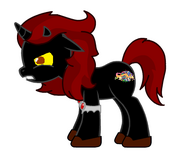 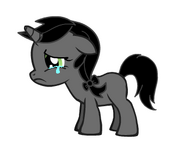 Young Wicked
Add a photo to this gallery
Retrieved from "https://spongebobandfriendsadventures.fandom.com/wiki/Wicked_Dark_Blacken_Heart?oldid=164260"
Community content is available under CC-BY-SA unless otherwise noted.